A banner day for nominations and acceptances

Today was a banner day, a trifecta, if you will, for the devoted fan of Holmes and Watson and its like.

Early in the wee hours of the morning came the Oscar nominations, and Bohemian Rhapsody got the nomination for best picture. And, as any serious film buff knows, Alex Basham, the practical electrician for Bohemian Rhapsody also worked as the practical electrician on Holmes and Watson. So it was great to see some of the talent that went into my favorite Sherlockian movie of last year getting some recognition.

And then came the evil twin of the Oscars, the Razzies. And there was Holmes and Watson with six nominations! There were snubs, of course, as the patriarchal Razzies sought to honor Will Ferrell and John C. Reilly without recognizing the magnificent work of Rebecca Hall, the inimitable Lauren Lapkus, Kelly Macdonald, OR Pam Ferris, each of whom did splendid work in the film. And while Etan Cohen got the directing nod, his amazing screenplay went un-nominated. But you know how these award shows are . . . so whimsical in their selections!

And then, to top all of that off, Paul Thomas Miller opened up memberships to Doyle's Rotary Coffin for simply sticking a coin in the nearest charity tin and printing out the ID card and personalizing it.

This newest Sherlockian society is described as "A society formed for the sole purpose of whole-heartedly and contrarily enjoying supid Holmesiana regardless of how canonical others consider it to be." While Holmes and Watson is sure to cause the formation of other such fan clubs and appreciation societies, Doyle's Rotary Coffin has pride of place as the first sparked from that film. What will its members be called? "Spinners?" "Coffin Nails?" "Doylerotisserie Chickens?" "Worms Unknown to Cinema Science?" Tis hard to say, so early, but there are at least three known members at this point.

And with a proper Sherlock Holmes hat as demonstrated in Holmes and Watson, and its appropriately Texas-sized membership card, affixed with a lanyard, here is a photo of its latest sign-up. 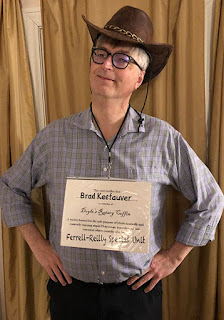 It has been quite a day.
Posted by Sherlock Peoria at 6:13 PM