The Holmes/Watson team that failed.

Back when "Sherlock Peoria" was an actual website all its own, I started a series based on an imaginary publication called The Watsonville Watsonian, whose mission it was to report on all things having to do with folk named Watson. Among its articles was a team-up between the boys Daddy Holmes and Daddy Watson that teased their hoped-for future for their sons. 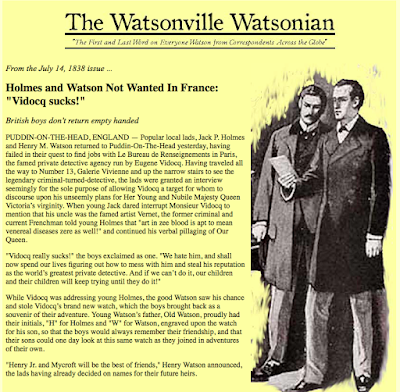 The little flaw in their dream?

Jack P. Holmes and Henry M. Watson were hoping that it was their sons Mycroft and Henry Jr. who would become the detective team supreme. And when the subject of John H. Watson's brother came up in a Twitter chat with Crystal Noll this morning, I couldn't help but think of that unlikely pairing. Mycroft Holmes, unwilling to go out and investigate crime scenes, and Henry Watson, plagued with a serious drinking problem. They could have been the Victorian Nero Wolfe and Archie Goodwin, but somewhere along the line, things just didn't work out. Mycroft wound up in government service and Henry wound up dead.

There's a story there, I think.

Mycroft, proving his amazing abilities to a key government figure by foiling a major threat to the British empire, yet losing his most important ally along the way. Perhaps that tragic victory was even what put him on a path toward never venturing outside his rooms, club, and workplace until the threat of Moriarty actually had him driving coaches for his little brother and counseling the younger Holmes not to risk another Watson in this latest war of masterminds.

Of course, that still leaves the Holmes/Watson sisters out there, ready to team-up. There has to be a Eurus/Harry fanfic out there somewhere, but I can't imagine it going any better than Mycroft/Henry. Sherlock and John remain the perfect Holmes/Watson pairing, and yet . . .

. . . well, there are still some lovely possibilities to ponder, aren't there?

Posted by Sherlock Peoria at 11:39 AM