Ooops, sorry folks, just having a private moment with my little Macbook before getting down to blogging. Feeling very full of feels, as they say, or maybe used to say. So many words to learn and unlearn as life goes on.

This was a very good year for the con. I met some new folks with brilliant, shiny new brains (well, that sure doesn't sound at all creepy . . . not pulling a Frankenstein here). Got to see some old con familiars and friends and familiar friends. (I am verbally fishtailing all over here. Apologies in advance!) Like the Grinch, my heart grew three sizes this weekend, and I returned all the toys to Whovi . . .  (Stop! Just report on the damn con, ye emotional bastard!)

Okay! After a nice night of sleep, a quick transcription of the lyrics to the Holmes and Watson song, finishing the blog of the night before, and some peanuts and Diet Dr. Pepper, I got down to my first panel of the day, "50 Shades of A." The "A" refers to asexual, and the panel was on Sherlock Holmes as a relatable asexual character. I know sometimes those who view the con from a distance get the impression that it's all "sex-having-Sherlock all the time," as those are the flashy bits, but the full range of 221B Con gives voice to so many perspectives that one may tire of me mentioning "So many perspectives!" which is a direction I at least hope I'm going. Anyway, good panel, and as with so many panelists, they handled their audience very well.

Next came "Sherlolly: Into the Future," where Molly Hooper got her time and due. I learned the word "Johntent" as well as got to hear the full take on "The Final Problem" from those who ship Sherlolly, which I hadn't gotten to hear so far, as well as many another thought on Molly's relationship with Sherlock. I hadn't ever thought much before about Anderson's feelings toward Molly if he shipped her with Sherlock, as we saw in "The Empty Hearse," which made me start mentally building my own fics, which any good character examination will do at the con.

Gotta love Molly, though, as she's a total creation of BBC Sherlock, in a role that Watson often ventures near to in some adaptations. If Eurus ever left prison for a normal like, I might like to see how they worked together, if that's even possible. But back to the con.

Lunch at the food truck after that -- the hotel brings a lovely food truck out into the courtyard where thing like tacos, Caesar salads, pulled pork sandwiches, chicken fingers, etc. can be grabbed, depending upon what day it is. You can sit outside in the courtyard and chat with the new Doctor (who might also be a doctor) and discuss Doyle's Rotary Coffin or whatever else you like. Oh, wait, did I say "Doyle's Rotary Coffin?" There was one! 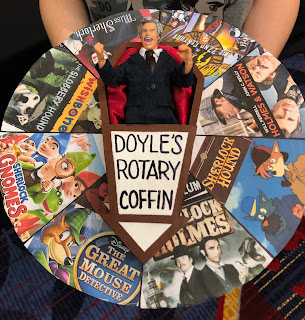 @imjohnlock4life created this beautiful spinner featuring Conan Doyle (played by a Will Ferrell action figure, which is too perfect, given the society's origins) that spins to point at a different Holmes movie every time -- if you've seen it, you get a mint! Having the Three Patch Podcast mention the DRC was wonderful, but this lovely creation has taken the . . . . group? movement? . . . to a whole new level. It makes me think that Doyle's Rotary Coffin needs to host its own game show at next year's con, and I do love doing game shows.

Which reminds me: Part of con fun is visiting the Three Patch suite or the Homeless Network Suite, and I missed out on my chance for one of those. Never enough time here. The podcast panels, like Three Patch and Baker Street Babes get sacrificed sometimes (like this year) because I know they'll be recorded for later listening. But I still miss seeing them live, so I will have to make a point of that next year. Hermione Granger's time turner might help with this, if such a thing existed, but who knows what trouble I could wind up causing along the way? 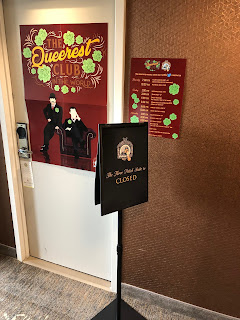 "Sherlock AUs before they were AUs" was the next panel, where Rabidsamfan and I were panelists covering the whole range of Sherlocks who were extended from the Canon, but were set in some other universe, many before Sherlockians even spoke of alternate universes as a thing.  It went pretty well, but I have to admit I was spending half the time dreaming of my upcoming three o'clock panel.
You know the one.

So soon after, I gathered up my box of trophies, went to the car for my framed Holmes and Watson movie poster and camped outside of the Florida room to prepare for my final panel of the day on that very movie. We didn't quite get a line of folks camping out with me waiting to get in, but friends of Holmes and Watson did start arriving early. The good Carter discovered the room was empty, having had no panel in the previous hour, and we started heading in and setting up shop. It was time to award Holmes and Watson with "Best Sherlock Holmes Movie of 2018" and presenting a trophy to every person who came to the panel was the best way to do that. 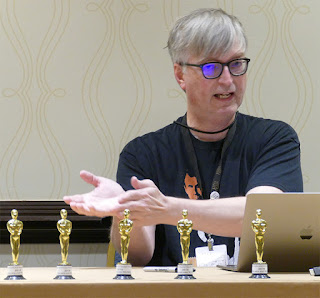 In the hour that followed, I hope I didn't tramp over Rabidsamfan too much in my enthusiasm to exude about Holmes and Watson, because I was coming at this panel with an energy like I don't think I've come to a panel with before -- but seen many a time from folks on other panels. There are moments when it's great to be a fan of something. This was one of them.

The panel ended rather organically at the five-minutes-til mark, as we all kind of broke into conversation, and that was just fine. We had a great audience.

I would say that was the perfect finish to 221B Con, but 221B Con has its own perfect ending, a little tradition that is kinda beautiful. Only one panel remains at 4 PM on a Sunday, and that's the con directors' "Our Last Bow." I've been to six of these so far, missing the con's sophmore effort for what were surely foolish reasons I've long forgotten, and I swear there have been less suggestions about the con itself every year, points of improvement lately centering on the venue's amenities, and those aren't many, nor too harsh. The hotel treats us pretty well.

I don't know if critics of the con have just stopped coming, leaving only the true believers behind, or what's going on here, but it sure feels to me like it's just an event people love. Don't get me wrong, it can have its bumpy spots. Certain fans might not feel as seen as they might be. Someone might say the wrong thing on occasion. And not everybody loves everybody else. But, y'know, with all the negative stuff floating around the country these days, it's still a little oasis of joy.

It's not like the Sherlockian events we were used to before Downey and Cumberbatch "disrupted" the Sherlockian world, to use business-speak. And I'm always of mixed feelings about more traditional Sherlockians discovering this little oasis -- I'm simultaneously stunned that some aren't the least bit curious about this con and wishing a few more would explore this side of our hobby, but I also don't want to see those who wouldn't appreciate it for what it is coming in with a "missionary" position. 221B Con is well beyond Sherlockian missionary positions. (Of course, I'm sure many a more traditional Sherlockian feels the same in reverse: Wishing more of us would come to their things, but not wanting suggestions of change.) But there's more than enough room for different styles of Sherlocking to exist these days, and 221B Con's particular style . . . well, you know where I stand on that.

It's a long drive to get here and it goes way too fast. But 221B Con leaves a warmth that will stay with you all year long, and, yeah, it just happened again this year.

Posted by Sherlock Peoria at 6:45 PM