A trip to see Ms. Adler

As bullpup "Calder," reporting for The Watsonian Weekly podcast, I naturally find that reporting their competes with my usual blogging for choice subjects and time. This week, for example you'll find one report on the subject I'm about to write about that is spoken on said podcast, and another which follows here. Here, of course, you get the benefit of links and photos as available.

Saturday, the good Carter and I drove up to Geneseo, Illinois, as we'd heard that Irene Adler was going to be making an appearance in that unlikely-seeming place. No Sherlockian societies up there that I had heard of, but apparently a regular stop for a local historical performer named Laura F. Keyes. Laura had been contributing a lot of good thoughts to our monthly Sherlock Holmes Story Society in recent months, so it seemed high time we made a trip to see a performance. And it was Irene Adler, this time, after all.

A nice drive through the country, a stop for lunch at a beautifully historic bar and grill (Cerno's in Kewanee), a small detour to look at one of my boyhood homes and the former F.U. White Elementary School (including the tiny street a third-grade me was voted crossing guard for), and we wound up at the Geneseo Public Library at the perfect time to get good seats for the show. 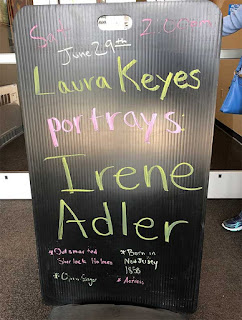 The librarian who came out to introduce Irene Adler set the scene as Irene's Paris home in July of 1891, and having all that Adlock shipping that's been programmed into many an elder Sherlockian's brain, I immediately thought, "Sherlock didn't go visit her after Reichenbach, did he?" But as soon as Irene Adler came center stage, I learned it was something that made a lot more sense: July 1891 was when Irene first got to read "A Scandal in Bohemia" in The Strand Magazine. And she was none too pleased with it.

Not that Irene was actually angry about it. She knew the true facts of the matter and had plainly enjoyed her little game with Sherlock Holmes. Her fondness for both the King of Bohemia and Godfrey Norton added many a smile to her memories of what led up to the tale we know, and just being investigated by the great Sherlock Holmes was a point of pride.

To learn about how "A Scandal in Bohemia" went down from Irene's point of view was a most enjoyable, and very fresh, take on a tale we knew so well. More than a few points along the way were new to me, including some bits about her wedding legalities, and there were a couple delightful twists and turns, as one would expect from Irene Adler.

Seeing Canonical characters re-enacted might be something more common for our big city Sherlockian cousins, but seeing an actress take up such a role here in middle Illinois for a one-woman-show is a rare treat. Laura's usual characters are those of a more normal historical nature, such as Mary Todd Lincoln or Laura Ingalls Wilder, and you can read more about her website, laurafkeyes.com .

It was a great way to spend a Saturday afternoon. 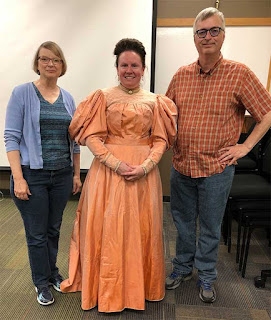 Posted by Sherlock Peoria at 11:24 PM