Sometimes another whose life has been touched by Sherlock Holmes just falls into your lap.

That happened to me tonight, as I picked up a copy of Profile By Gaslight to take to the Sherlock Holmes Story Society after work for our closing reading of Starrett's "221B." Out fell a newspaper clipping, folded in quarters, with a book review from May Lamberton Becker entitled "The Immortal Sherlock Holmes." 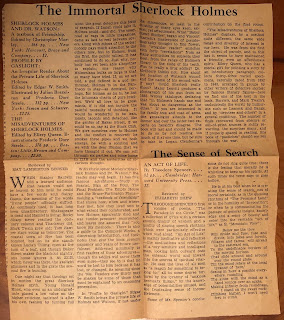 The browning newsprint's acid had actually stained pages 124 and 125 of the book it had been buried inside, the last page of "The Coat of Arms of Sherlock Holmes" and the first of "Genealogical Notes on Holmes," but I didn't care a whit. This was not pristine copy and a find is a find.

The review was not just any review, but May Lamberton Becker's review of the Sherlockian triple event of 1944: The publication of Christopher Morley's Sherlock Holmes and Dr. Watson, Edgar Smith's Profile by Gaslight, and Ellery Queen's The Misadventures of Sherlock Holmes, all collections edited by the men in question, and a set sure to set any occupant of 1944 on a course to red-blooded Sherlockian in just three books. The first, with Doyle originals. The second, full of articles by studious Sherlockian experts. The third, all pastiche and parody by the best of authors. And May Lamberton Becker was here writing wonderfully of all three.

In the course of her review, one learns that Mrs. Becker hasn't just read those three books either. "What 'Baker Street Studies' began and Vincent Starret's masterpiece of pseudo biography brought to full flower, this 'irregular reader' enriches." May Lamberton Becker has read at least five core Sherlockian classics at the time of writing this review. It is not at all surprising that six years later she would write the introduction to another Holmes collection, The Book of Sherlock Holmes. (Did I immediately order a copy from a bookshop? Yes, I did.)

Her references to Stanley Baldwin, Sairey Gamp, and the Stork club might require a wee bit of reminding, but that's half the fun of finding a beautiful little time capsule of a review like Mary Lamberton Becker's work. With our magic lamp of Google at hand, enlightenment is but seconds away on any of these mysteries, and another era starts to emerge.

Born in New York and dying in Surrey, Mary Lamberton Becker was a pro-Britain American at a time when England needed a friend, and the end of her review gives you a real idea why; ". . . if properly spaced in reading, this book of 'pastiches' should see you through the war." In 1960, T.S. Eliot dedicated London's National Book League reading room to her, for inspiring and guiding readers with her reviews and anthologies. And given her review, "The Immortal Sherlock Holmes," from some unknown 1944 newspaper, tonight I learned that she surely inspired more than a few people in Sherlock's general direction. 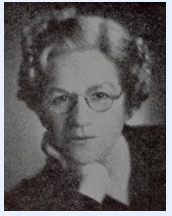