All those Matilda Briggs

"Matilda Briggs was not the name of a young woman, Watson. It was a ship which is associated with the giant rat of Sumatra, a story for which the world is not yet prepared."


This week, my friend John Holliday seems to have found evidence that Sherlock Holmes made a statement that was not entirely correct. "Matilda Briggs" was the name of at least one young woman. 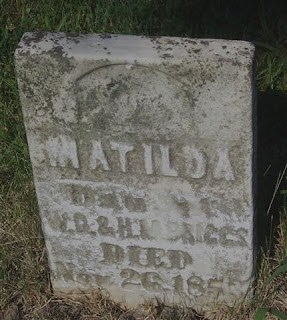 Matilda, one might sadly deduce from her tombstone in a local cemetery, was a very young woman who seems to have died as she was born on November 26, 1853. And even though it would be the longest and strangest turn for such a child from rural Illinois to have any connection to a case published in 1924, the devoted Sherlockian has to start looking things up. So first I turned to Donald A. Redmond's Sherlock Holmes: A Study in Sources, a 1982 work that goes after more Canonical names than you'd believe.

Redmond's main conclusion is that no ship named "Matilda Briggs" actually existed, and that Conan Doyle based the Matilda Briggs on the Marie Celeste, a famed lost ship. (One might also note that Don Redmond was a Doylean authorship guy. Apologies to my Watsonian-authorship-favoring readers out there.) Conan Doyle was definitely into the mystery of the Marie Celeste, as he wrote a fictional account of it that was published in 1884, titled "J. Habakuk Jephson's Statment."

The captain of the Marie Celeste was one Benjamin Spooner Briggs, who had a two year old daughter named Sophia Matilda Briggs. Sophia Matilda, at that tender age of two, was presumed lost along with the crew of the ship when it turned up, sailing along with no one aboard, in 1872. Sophia Matilda is memorialized in a Marion, Massachusetts cemetery, the town that particular Briggs family called home.

While Sherlock Holmes was definitely speaking of a ship of his own experience, his statement "Matilda Briggs was not the name of a young woman," taken out of context, is definitely not true. Which is a good thing, really, because as sad as the fates of the two Matilda Briggs we know about were, neither involved a giant rat from Sumatra. The world is definitely not prepared for that thing to start turning up around baby girls.
Posted by Sherlock Peoria at 7:44 AM