The Mystery of the Scarecrow Corpse . . . and Derek!

In 1976, Peter Pan Industries was printing comic books the size of record albums . . . because they were record albums. Star Trek, Captain America, Superman, the Hulk, Planet of the Apes, Justice League, Space 1999, even Gemini Man (probably not the same plot as this fall's Will Smith movie). And among those was one featuring a guy who looked like Sherlock Holmes. 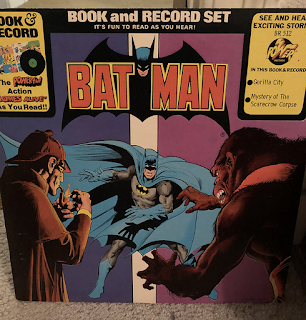 The cover of the album has Batman facing off against Sherlock Holmes and a gorilla in a crossing-guard belt, which one might be tempted to theorize is John Watson after some serum of langur, but it actually represents to two stories found on either side of the record, "The Mystery of the Scarecrow Corpse" and "Gorilla City." Both are by comics pros Elliot S. Maggin and Cary Bates, and eight pages long, eleven minutes long on the record, which you can listen to on YouTube.

It was back in the days when Batman ran around in public, lectures at "the Sussex campus of Oxford University," and takes phone calls backstage. Batman goes to Cadbury's local pub dressed as the British version of his "Matches Malone" persona and plays darts against a middle-aged guy named Billy, whom we have to wonder if he once worked at 221B Baker Street. But leaving the bar, he runs into . . . well, almost Sherlock Holmes. Inspector Derek Holmes. No relation, but takes "a lot of ribbing" because he dresses just like Sherlock Holmes and says things like "my dear Batman." (Don't worry, the "elementary" is coming!) 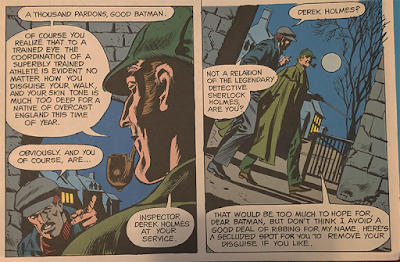 Without Watson or Robin, the pair form their own "dynamic duo" and they head into the swamps of Devon. (The village of Cadbury, it turns out, is about a 35 minute drive from Dartmoor National Park.) There, they find a the villains who Inspector Derek lets capture him, probably just so he can utter the words, "Elementary, my dear abductors."

Once he finds out all he needs to know, he lights his pipe to signal Batman, and since it's the 1970s, it's time for roundhouse kicks! Both Batman and Derek Holmes get roundhouse kicks in worthy of Walker, Texas Ranger. 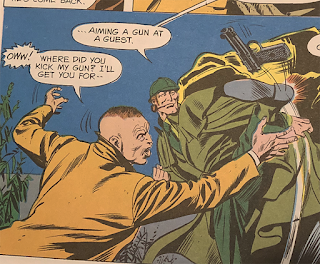 Batman delivers the bad guys to Scotland Yard single-handedly, only to find out from Inspector Oswald, the man who called him in on the case, that Scotland Yard's guy had a car accident and didn't make it to Devon. Batman was actually working with the real ghost of Sherlock Holmes! Does that mean Sherlock Holmes was dead?

Well, maybe not. That same year, The Brave and the Bold Special for 1978 featured "THE STRANGEST B&B TEAM-UP EVER! WITH A FOURTH FABULOUS CO-STAR TOO!" The first three co-stars were Batman, Deadman, and Sgt. Rock . . . the fourth? 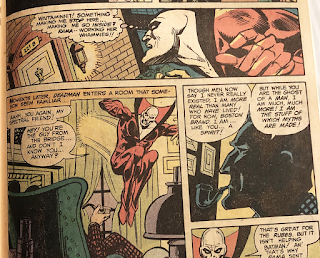 Well, he's not a ghost. He's a spirit . . . "the stuff of which myths are made!" So, given that The Brave and the Bold Special was put out by DC Comics in their main continuity in the same year we see "Derek Holmes" showing up, I'm thinking he's another appearance of that same spirit, whatever you consider that spirit to be.

I just hope his Watson doesn't turn out to be a gorilla, after all.
Posted by Sherlock Peoria at 10:21 PM