A couple of weeks ago, I wrote of a Sherlockian named Mary Lamberton Becker, whose review of three classic Sherlockian works of 1944 fell out of the pages of one of those same books when I was looking up something else. Following up on her in Ron DeWaal's classic Sherlock Holmes bibliography, I found MLB also wrote the introduction to a 1950 collection of Doyle's Holmes works called The Book of Sherlock Holmes, and I had to get a copy. 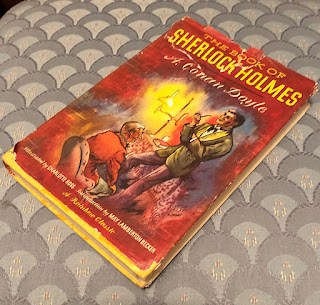 It was cheap, only six bucks postpaid, and had the best part of the dustjacket, but I really wanted to read Mary Lamberton Becker's introduction "HOW THIS BOOK CAME TO BE WRITTEN," to see where else her mind went with Sherlock Holmes.

Her history of Sherlock Holmes's creation is a little bit sure of Doyle's process: "His last name should be that of the Autocrat of the Breakfast Table. What was that chap's name he had played cricket with when he was a boy and scored so many runs? Sherlock, that was it. He should have a devoted friend to tell his story; such a man wouldn't talk about himself. His pen began to race. Dr. Watson began to look for rooms. So did Sherlock Holmes."

In the course of three pages, Becker rolls through Beeton's, Lippincott's, the Strand, Reichenbach, "Protests stormed in," Sussex retirement, Ronald Knox's essay,  and "A society of eminent persons was formed in London that wrote on matters such as the exact location of Dr. Watson's wound, or just how much Sherlock Holmes really did know about music." She writes of Frederic Dorr Steele and William Gillette, and even gets a personal story in:

"A famous school for boys once invited me to an entertainment in which students represented characters in fiction; each walked once across the stage, carrying one thing and speaking one sentence and the audience was to guess. Two boys entered, one wearing a deer-stalker cap, the other carrying a small table. They sat down facing each other, one said 'Elementary!' and the whole school roared out their names. I left for England soon after, taking with me a photograph of the scene, and sent it with a description of what had happened to Conan Doyle. He was not even dictating that many letters then, but with his own hand he wrote me how that shout had moved him. It was one of the last times he used the pen. That month, July 1930, he died at his home in Sussex."

Mary Lamberton Becker finishes out her essay by introducing the artist for the book, Charlotte Ross, who had quite a resume.

I don't know if Mrs. Becker wrote more on Sherlock Holmes that one review of three books and an introduction, but what I have read of hers captures a time when this hobby of our was so very new, in a world much different from our own. It's good to get a glimpse from a different angle than our usual view, and wonder what else might have been in that view at the time.
Posted by Sherlock Peoria at 11:30 PM