Grandma, Morley, and me

Our house has many a bookshelf in it, some that don't get visited as often as others. In search of a particular non-Sherlockian classic this evening, I was going through a shelf when I found a book that seemed out of place. The name on the spine said "Christopher Morley," and I thought, "Why isn't this with my Sherlockian and Sherlockian-related books?"

And then I opened it, saw the autograph inside and went, "Oh!"

It wasn't Morley's autograph. It was my grandmother's. 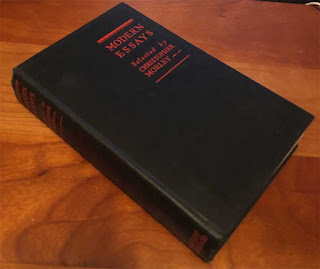 Next to her name was "English 8." A school book. That thesis was supported by Morley's own words in his introduction: "I have, to be frank, a secret ambition that a book of this sort may even be used as a small, but useful weapon in the classroom." The book, Modern Essays, contains many a modern example of the essay chosen by Morley just prior to the book's 1921 publication, from both England and America. Marquis, Milne, Beerbohm, Leacock, Belloc, Conrad . . . lots of familiar names, none of them Doyle, unfortunately, but this is essay-land, not short story world.

Stuart P. Sherman's essay on the "Diogenes of the Victorians" might cause a Sherlockian's ears to perk up, but alas, Samuel Butler is the one to whom Sherman assigns that title, and, like Sherlock Holmes, Samuel Butler has his own cult following, called, of course, "Butlerians." (Seriously.) Niagara Falls gets an essay, Boswell and Johnson come up. "Sherlock's style too is very elegant ..." but I fear that mention is about Thomas Sherlock, as the subject at hand is sermons. One sees an essay titled "Some Nonsense About A Dog," and fears a bad review for The Hound of the Baskervilles, but no.

There is so much in this book that comes so close to our Sherlockian Canon but never quite connects. Still, as a point in time, it hits so many topics of the day so marvelously, as well as some that are eternal, like being awake through the night.

My grandmother made some little notes in the book, like an arrow from the word "Cockney" to her tiny notation in the margin "one who lives in London." She also put a little "x" next to essays in the index that I'm guessing were her favorites? Hard to say.

But it was fascinating to find a spot where old Chris Morley had touched my grandmother's life, long before I came into being and ran into his literary tendrils myself.
Posted by Sherlock Peoria at 10:43 PM