Keep an eye out for tricksters!

Please allow me to introduce myself, I'm just a big fat liar.

To anyone who just recently realized that I'm posting photos of substantially altered books from my shelves, I'll let you in on a secret: This is a long-standing pattern of behavior. 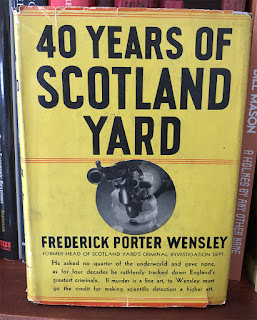 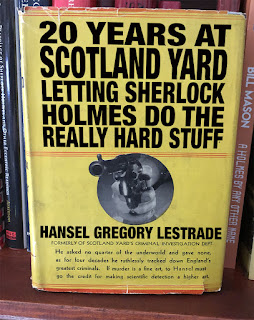 There's a lesson here about the world, of course. The more we really want something, the more we're apt to believe (or at least hope for) what the con man is selling us to be true, whatever clothes they're wearing. In this case, I'm not a politician, salesman, or religious leader. I'm just a longtime Sherlockian who has a decent library and a tiny bit of street cred. But don't let me get too serious here, as I'm just doing this for fun.

Two of my Twitter feeds of late have been Paperback Paradise and author Richard Kadrey, both of which love to Photoshop books into bizarre creations. And loving both old books and bizarre creations, I had to try my hand. This new creative effort dates back to last year, when I caught a particular friend with Radix Pedis Diaboli, a book I then felt obliged to write. But that's just a recent bout of playing the Sherlockian trickster.

Some decades ago, when Sherlockian journals and newsletters were booming, random issues of something called Reichenbachian Cliff-Notes started appearing. They weren't all created by me, I have to say, nor even in Peoria. But they were purposefully designed to vex the obsessive by randomizing cover dates and numbering, and mention other issues that didn't exist.

Like I said, I'm just a big fat liar.

Speaking of "other issues that didn't exist," there is at least one footnote in the history of The Baker Street Journal that references something that doesn't exist. Not to hard to deduce if one follows a certain pattern of trickster behavior, but I'll leave that there. The footnote actually credits the best man at my wedding, a non-Sherlockian, with a scholarly article . . . that also doesn't exist.

So I am a lying liar who fibs and fools and sometimes fancies himself a Sherlockian Loki.

But since I came into a hobby where much of the attraction was a grand game of playing an author was really the literary agent of the narrator, and that very author was known for the occasional spritely hoax as well, I don't think that was not to be expected.

There are serious Sherlockians our there who are doing actual scholarly work, and it's a shame that somehow we all find ourselves under the same group identity. It's really a microcosm of our world right now, though, where serious people doing serious, important work seem to have their credibility hampered by fools with agendas pushing obvious lies. But at least in Sherlockiana, from Ronald Knox's original 1911 essay onward, most of us are aware of the vein of playing around that has long run through our hobby.

Doesn't hurt to stay on your toes, though. And as in the case of Radix Pedis Diaboli, just because something didn't exist, it doesn't mean it won't one day.

P.S. The Totally Phallus-Obsessed Sherlock Holmes is not one that I'm bringing forth into reality. It's all yours.

P.P.S. I'm probably not stopping in such behavior anytime soon.
Posted by Sherlock Peoria at 12:59 PM