Among my other Sherlockian skills is one I call "bad at running a scion society." Maybe it was the timing or just my own self-absorbtion/maybe-ADD, but along the way, between the Hansoms of John Clayton losing it's founding show-runner and the final meeting, we did get in a few attempts at something different (Which may have been the real issue -- to run a society, somebody has to be into holding a routine together, and not always reinventing the thing. But I digress.) One of those events was a video production of "The Adventure of the Three Garridebs" done in one-take after a single table read by the group's members. I suspect it was inspired by that very schlock-inspiring 1994 film Ed Wood, in which Johnny Depp's title character was always satisfied with the first take of everything.

What I do know for sure was that the title card was inspired by 1999's The Blair Witch Project, another adventure in video schlock. Here's the cover of the pamphlet that we handed out with copies I had made of the tape. 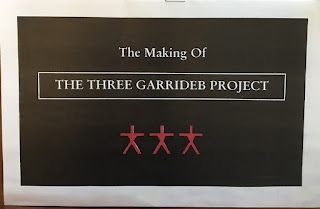 The production was an impromptu one, at the January 2000 meeting of the Hansoms of John Clayton, held in the mansion that housed the offices of Converse Marketing. It as a historic site, built in 1881 and restored by Converse, and a beautiful site for filming a Sherlockian production. Of course, had we spent any time in costuming, learning lines, etc. 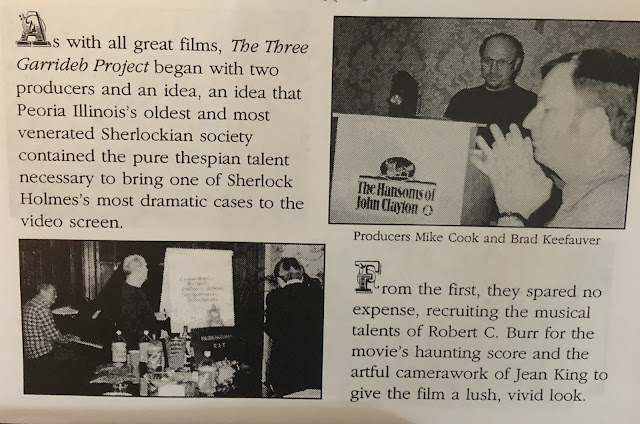 "As with all great films, The Three Garrideb Project began with two producers and an idea, an idea that Peoria's oldest and most venerated Sherlockian society contained the pure thespian talent necessary to bring one of Sherlock Holmes's most dramatic cases to the video screen." This, of course, is pure puffery. The late Mike Cook, pictured at the podium above, worked at Converse Marketing and was always a wonderful resource for the Hansoms. I would almost kill to have the  wonderful spinning wheel of the 60 cases he built, with Basil Rathbone's magnifying glass focussed in on the case it stopped at. He also built that lecturn he is standing behin. I do still have that.

"From the first, they spared no expense, recruiting the musical talents of Robert C. Burr for the movie's haunting score and the artful camerawork of Jean King to give the film a lush, vivid look." More puffery, of course, but I don't think many Sherlockians appreciated Bob Burr's keyboard skills. He had a baby grand piano and an organ in his living room, and he and his girlfriend Lucy often played duets. Jean King, the video camera operator, is, of course, my mother. (Yes, I'm the sort of mama's boy who has her video his exploits. Explains a lot, doesn't it?) 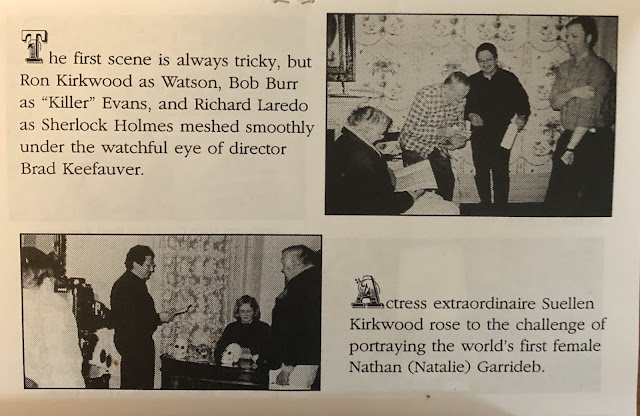 Of all the actors, I think Suellen Kirkwood gives the best performance as Nathan Garrideb, though her late husband Ron's Watson has his moments, as do Bob's "Killer" Evans and Richard Laredo's Sherlock. Sue is the last of the Hansoms we're still in contact with, showing up at the library discussion group every now and again. 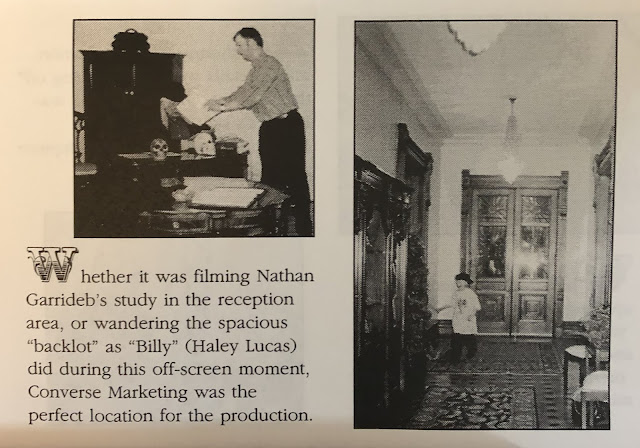 As I mentioned before, Converse Manor is a beautiful place. It had a Victorian elevator and pipes running water through the outer walls to cool it in summer. It also has a ballroom on it's uppermost floor. 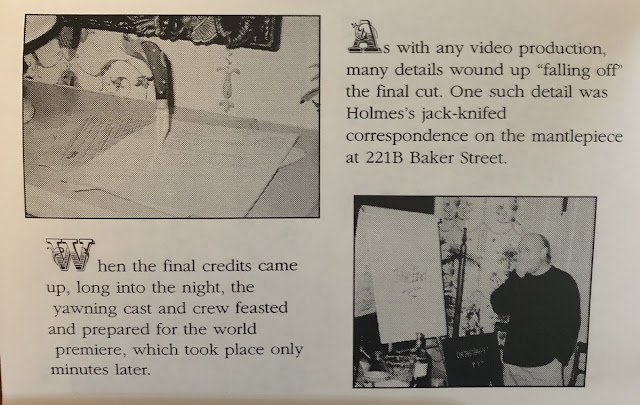 As with any meeting of the Hansoms of John Clayton, once the official meeting was done, we always ate refreshments that were basically a late supper, and movie-filming night was no different. 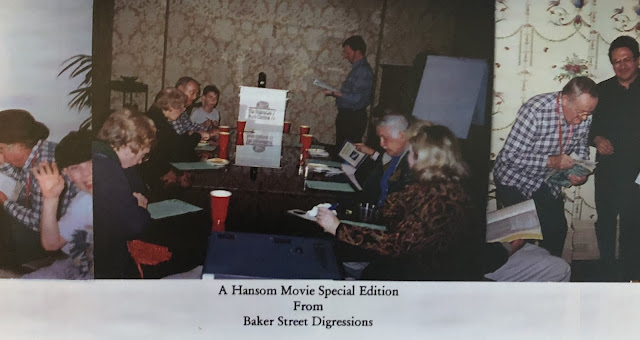 It was a nice evening during the latter days of the Sherlockian society, and the video is now on YouTube which you can find here.
Posted by Sherlock Peoria at 1:45 PM