The medals of the Hansoms of John Clayton

Living a Sherlockian life, one sometimes forgets how quickly things can become collectable with time. Maybe not to everyone, but once a specialist in a particular area of Sherlockiana zeroes in on the fact that something exists, and wants to add it to their collection . . . VOILA! Collectable!

When a mysterious medallion turned up on the e-mail newsletter The Fourth Garrideb this morning with the heading, "Homework Assignment: The 1997 DISI Award Medals," I was immediately curious as to what a "DISI Award Medal" could be, and clicked the link to the post on it.  Once there, a picture popped up, and I was shocked to see that this DISI Award was something I myself had gotten made at a local awards shop in the 1990s, and have hanging in my library. So it seemed a good time to go back and talk about all of the medals handed out by Peoria's scion society, the Hansoms of John Clayton, over the years. 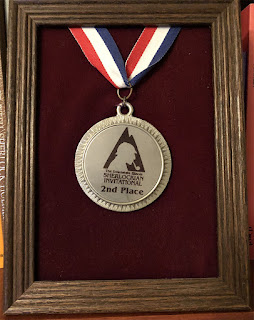 You'll note there is a mountain peak on that one, as the logo symbolized "a new pinnacle of Sherlockian achievement," though at least one well-known Sherlockian called us out for not having any mountains in central Illinois. Details, details.

The Downstate Illinois Sherlockian Invitational was an afternoon event, preceding the annual banquet of Peoria's own Hansoms of John Clayton, in which we invited neighboring scion societies to join us for a little friendly competition in three separate events: Canonical knowledge, parody and pastiche, and Sherlockian presentation. Each of the three events had a gold, silver, and bronze medal awarded, as well as a medal given to the Sherlock Holmes society that scored the highest in cumulative points for the three events. The first DISI, held September 28, 1996.

The 1996 tourney saw competition between the Hansoms, the Occupants of the Empty House, the Noble Bachelors, the Harpooners of the Sea Unicorn, and the One Fixed Point Society. The scholastic bowl battle of knowledge went to the Occupants team that first year, with Bill Cochran, Joe Eckrich, and Gordon Speck holding forth. The writing competition was won by Art Schroeder for the Noble Bachelors for his story "The Double-Good Fortune of Henry Baker and his Lucky Goose," which was collected with the other entries and printed in a little paperback called A Pocket Full of Sherlock Holmes and handed out at the evening's banquet where the awards were given. For presentation, Bill Cochran took home the gold for the Occupants with a talk on the history and inner workings of that society, which won that group the overall prize for 1996. 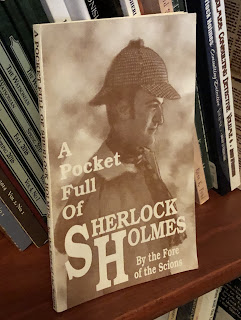 A year later, things were a little different. Barb Roscoe, who had been on the Harpooners team the year before, gathered together a team she called "the Garish Debs," (herself, Janet Bensley, Patricia King, and Shannon King). The Tankerville Club saw Paul Herbert, Ralph Hall, and Dob Hobbs bringing heavy hitters from all over the map.  And the beautiful big spinning wheel of sixty Canonical cases, a lost artifact of Hansom lore, was used for the first part of knowledge battle, with the Tankervilles getting a great lead during that phase. Part two was a nigh-impossible task of transcribing as much of a Canonical tale from memory as possible in five minutes where the Hansoms team (Bob Burr, Kathy Carter, and Nellie Brown) scored big by choosing A Study in Scarlet for their tale to remember. But in a "Final Jeopardy" upset all the leading competitors bet too many points on a question that wound up being "Who died in Lauder in 1887?" and lost out to the more cautious Garish Debs.

The literary competition saw Patricia King take the gold for the Garish Debs with her story "Going Ape." But instead of a presentation event, 1997's Downstate Illinois Sherlockian Invitational's final event was a musical competition. The Debs only made it to third in that event, as Bob Burr brought in ringers (a.k.a. his old barbershop quartet) to rule the musical part of the program for the Hansoms. The Garish Debs still took the overall prize of the gold. (Only silver pictured below, as my house only had a silver winner.) 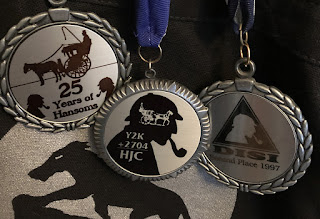 That contest took place on September 27, 1997, which was the 20th anniversary year of the Hansoms of John Clayton, and as you can see in the above picture, a commemorative medal was given out five years later for the group's twenty-fifth anniversary celebration in November of 2002. In between another was made as a party favor for the year 2000 Hansoms banquet, because back then crossing into a new century was kind of a big deal. (Twenty years later? Not so much.)

And that is the story of the four medallions that came out of the three decades of the Peoria, Illinois Sherlock Holmes society, the Hansoms of John Clayton. And like many a local scion party favor, they are now rarities, put out in small numbers and starting to get lost to time as they fall out of Sherlockian hands and those who knew what they were about forget to write it down.  I appreciate Greg Ruby taking an interest, and getting me to put out a post on this little corner of our Sherlockian world that I had nearly forgotten.

You never know what you do today that someone might take an interest in some twenty-three years from now.
Posted by Sherlock Peoria at 8:46 PM