Sherlock Holmes in "Modern" Times (being the 1970s)

A long, long time ago, in an evening of drinks and Sherlockian talk with my neighbor Bob, he brought out a book he had recently acquired. The title was Sherlock Holmes in Modern Times: An Anthology of Short Stories and it was by an author named Ira Bernard Dworkin. 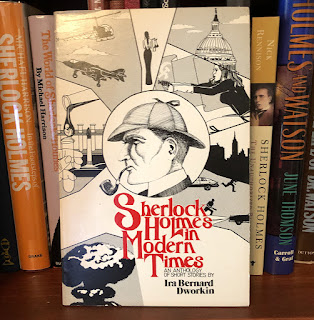 Judge Dworkin was one of the founders of the Red-Headed League of New Jersey, when it came into being on November first of 1976, a society that is still going strong today. I'm sure many a member of that group picked up a copy when it came out in 1980, with a copyright-page price of $6.50. I'm not sure what the deal was with William-Frederick Press, the publisher of Sherlock Holmes in Modern Times, but one strongly suspects there was an element of self-publishing going on here. This is not a book that fought its way out of a slush pile.

Bob Burr and I had quite a merry evening reading passages from Sherlock Holmes in Modern Times, and it was such a memorable evening that I would later start to think I actually owned the book. Wanting to quote a particular passage from it a couple of weeks back, I realized I didn't, but even in a time of virus-spurred lockdowns, I was able to find a book dealer to gladly send it along.

When it did come and I gleefully started reading, the first page of the first story was such a dry recounting of some World War Two military business that I immediately put the book down, thinking my memories must have been off. But since the book is only a slim eighty pages end-to-end, I determined this morning to sit down with the book (and Twitter) to push on and read the whole thing.

I was not disappointed. It was just as I recalled, full of so-bad-it's-good moments, as well as some "men writing women characters" tragic moments that justify any fic "crimes" writers of other gender descriptions might pen today. Sherlock Holmes in Modern Times is layered in white male privilege. Sherlock Holmes is now the solver of not just mysteries, but all things, like a modern Solomon.

As the prologue gives warning: "Holmes' role is also modernized, casting him as an emissary of heads of state, amicus curiae to courts, social worker, as well as in his traditional role as the world's outstanding criminal investigator." And Holmes is more social worker and matchmaker than criminal investigator in the pages that follow -- as I tweeted this morning, in his most notable murder investigation for Scotland Yard, he basically goes, "Yep, you guys caught the killer. Murder is so sad."

Given that he was a veteran of World War II and a sitting judge, Ira Dworkin might be forgiven for dragging Sherlock Holmes through court case after court case involving matters that grew out of the war. But the overly beautiful teenage girls, whom Holmes and Watson both have to verbally admire even when they're pregnant, the soap opera love stories, the occasional lapses into transcription-style dialogue . . . well, one just isn't sure what to make of those. We've all written some bad Sherlock at one point or another (and if you think you haven't, either you're kidding yourself or you plainly just don't love Sherlock enough), but Sherlock Holmes in Modern Times is that rare example of fanfic making it into professional-looking print in a time when that was a very, very costly thing to pull off.

Had more folks been able to turn the same trick back then, we might have an entirely different view of what the 1970s were like in the Sherlockian world. There was as much silliness from grown folk back then as was ever attributed to any other generation of Sherlockians. I wish we had more of these books, but for the moment, I'm just glad I got to enjoy this one.

So, thanks, Judge Dworkin! I hope there are enough fiery-red-headed, disheveled angels in heaven for ya, and that they've explained a few things about writing female characters during your time there. 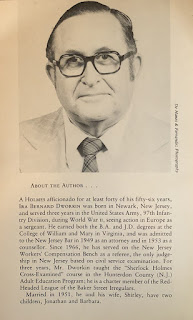 Posted by Sherlock Peoria at 1:21 PM