221Bcon versus The Holmes & Watson Report.

At the end of 2004, I realized that I was done with producing print. The internet made it just too easy to distribute to more eyes than printers-and-post-office with so much less work. Yes, there is a certain loss of focus when you compare the experience of a print journal to what you'll find on a web site or blog. And not everybody wants to go digital just yet. But for me, the time to move on had come. 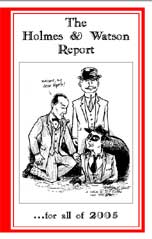 The thing is, sometimes, even after you've moved on, you find you're still dragging some residue from that earlier time. Many, many pounds of residue, at that.

For me, that was about twenty or so copies of six or seven of the later issues of The Holmes & Watson Report. Doesn't sound like that much, but it fills a banker's box. And among my goals for the 221Bcon weekend in Atlanta?

Somebody at the con has to have never seen this thing before, and some of those somebodies might enjoy a free copy or copies of a defunct journal. If nothing else they can hunt up a few of the regular writers from The Holmes & Watson Report and get articles signed to raise the value.

We shall see. The road to 221Bcon continues.