A character named Sherlock Holmes with a heroin problem and a sexual three-way . . . ?

Tonight's Elementary begins with a scene that can't help but remind a Sherlockian videophile of 2002's A Case of Evil (a movie IMDB now mysteriously calls Sherlock . . . huh?), quickly segues into some exotic monk chat, and a nice twist as Mr. Elementary sneaks up on a secretary. WTF, Elementary? I'm actually enjoying this!

I mean, walking around in his pea-coat, Mr. Elementary looks like he's a corn-cob pipe and a squint away from playing Popeye, but still . . .  a missing persons case and not a murder, Mr. Elementary looking for a room-mate as a character subplot. There is a certain simple elegance to it, normally missing in the tries-too-hard sensationalism of so many of Mr. Elementary's tales.

Speaking of elegance, Baker Street was always a properly Victorian jumble, but it was never shabby. When the story picks up on Elementary, I find myself greedily wanting more . . . like a less shabby residence. And that NYPD office they spend so much time in . . . done completely in 1950s institutional, with those yellow block walls that have never seen paint other than what was baked on them by Elvis before he became famous, or some other denizen of that era.

But Mr. Elementary and Joan get out of the city for a bit, and things look a little better for a while.

Clyde seems to be the one on the show from the Vernet bloodline in this adaptation, as his joy in painting is revealed this episode. Phil Simms gets a call. Mr. Elementary gives Joan a pleasant wake-up for a change (obviously trying to get her to move back in). A lot of happy little details this episode, and Elementary is always better with a lighter touch.

After a discussion started by Rob Nunn on Twitter today asked why "modern versions stress the friction between between Holmes & Watson so much," it was rather ironic that part of the pleasure of tonight's Elementary was seeing its consulting detective and his partner actually getting along better than they have in three years.

Of course, all this pleasantry could possibly just have been setting the audience up for what should have been a horrific moment in the show's final moments. But, as has been Elementary's issue for a long time, anyone besides the four main characters (and possibly the Moriarty-Mycroft-Kitty Winter one-per-season semi-regular) doesn't get enough development for us to really care about them too much. Somebody dies at the end, and the saddest part of that shocking turn is that I'd have reacted more strongly for Clyde the turtle taking a flesh-wound in a shoot-out. 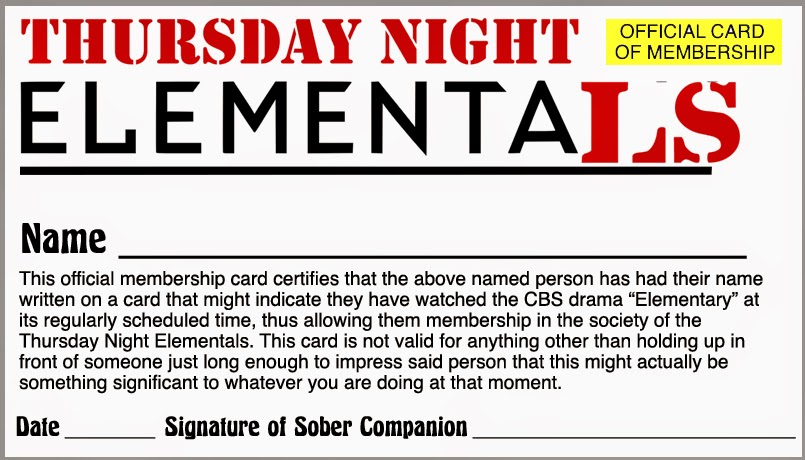 Posted by Sherlock Peoria at 10:43 PM