Publishers like to come out with special editions of classic books. Barnes & Noble has a track record of putting out some quite lovely ones. Yet there are other editions of the Sherlock Holmes stories that become even more special to a Sherlock Holmes fan due to the circumstances that surround their time with that particular volume. A childhood gift from a parent. A first-encounter copy on a friend's bookshelf. Such special editions and their reasons are as varied as Sherlockians themselves.

And almost all of them have stories attached. The kind of stories that an aging Sherlockian might tell again and again, even if you're already heard it. And, of course, that means I've got one of those and I'm going to tell it again.

I found myself writing about a particular tale this week, and in selecting where I was going to re-read it from, I decided upon this humble little paperback: 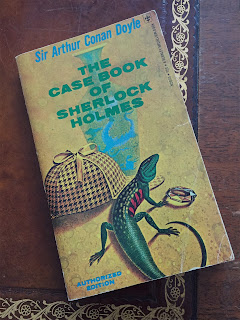 And the memories started coming back . . . .

It was the summer of 1977. I had just finished junior college and was working my familiar summer job before heading to the state school down the interstate to get a B.S. I have a lot of good stories from that summer, but where this book comes in was after the invitation from my grandparents Keefauver to spend a week in a Minnesota fishing cabin with them, my brothers, and my aunt.

Now . . . fishing cabin . . . if you've read much of this blog, you might have developed a view of me as not a real outdoorsy sort, and you would be right. In the mornings when all of the family fishermen would load up the boat and head out on to the lake for a day's fishing, where would I wind up? Not in that boat.

I'd head down to the beach and try to emulate Patrick Duffy's dolphin swim from Man from Atlantis, hang out with my grandmother, find something to eat . . . really just doing a whole lot of nothing. And that started to get boring very quickly. So on a trip into town to buy groceries, I found a spinner rack of paperback books in the grocery store and started combing it for a diversion.

Now, I already had been reading a lot of Sherlock Holmes pastiche at the time, and had written a term paper on him that required a complete read of the whole Canonical sixty. But I was not yet enough of a Sherlockian that I carried a copy of the Canon with me on trips. Finding that paperback edition of Casebook, already a decade old even though it was being sold new (you used to find brand new old books in bookstores, back in the day), seemed like a minor miracle.

I took Casebook back to the fishing cabin and devoured it, then decided I would use it to fashion my own Sherlock Holmes tale. But what part of Holmes's life could I find completely detailed in that one lone volume without the rest of the Canon? His retirement to Sussex, of course, written up in "The Lion's Mane." So I picked through that story some more and wrote "The Sussex Irregular," the first thing I ever had published in a Sherlockian publication. A pastiche, of course, which is what we used to call our fanfic back in "fancier" Sherlockian times, but fanfic it was.

(That lizard is the puzzling part . . . does it tie to "Sussex Vampire?" Who knows, at this point.)

Posted by Sherlock Peoria at 12:42 PM