With January coming to a close, and the Sherlock Holmes birthday weekend festivities well in the rearview mirror, I'm finally getting to something I tried to do a few weeks ago -- dig up the four big dinner pictures from the Holmes celebrations in New York on four of the six occasions I made it to the big city. (The other two being a Baskerville Bash in 1999 and . . . well, another time that may be a memory glitch.) I was hope to find evidence of the notorious upside down table number from the 1987 BSI dinner that should have been a warning flag, but as you'll see below, no such luck. 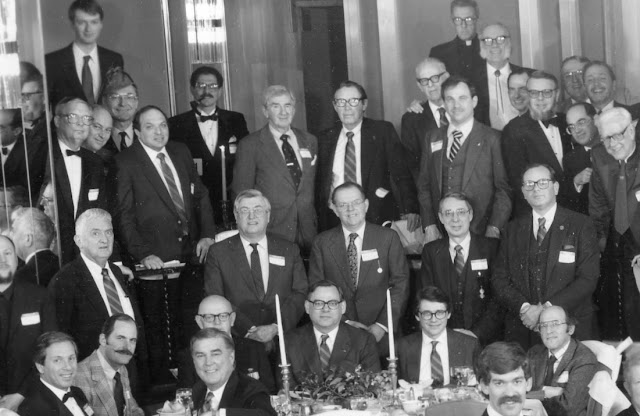 You'll find a much younger, contacts-wearing version of me in the upper left corner of the picture. I was standing on a chair, as was Isaac Asimov, whom you'll see near the upper right corner of the photo. It was the first year of assigned seating at the dinner, and Asimov wasn't happy about it, gathering several of his friends at the table despite their assigned-elsewhere seats. Hence the upside-down table number I was looking for. But check out some of the moustaches in the lower part of the picture!

Two years went by, and I actually found myself at a table with at least a couple of people I knew. 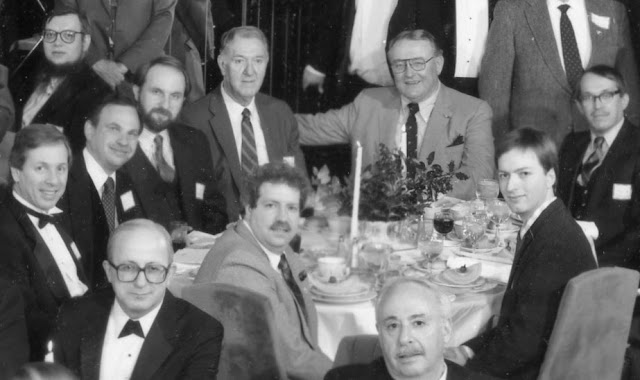 Seated next to me in 1989 with the curly hair and moustache was Jim Duval, a Sherlockian we lost far too soon. His journal, The Quarter£y $tatement, was one of my favorites back then. There was a certain something missed from that picture and the previous one, which got me into a little bit of trouble that year. You may notice it in the next picture. 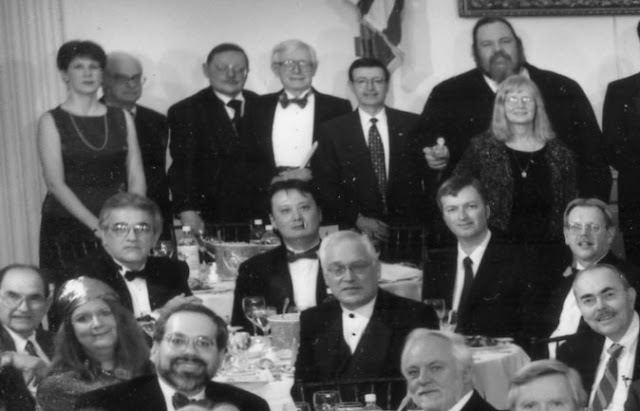 One might think getting seated in the corner of the room in 2001 was a token of falling out of favor, but if you look who else was in that general vicinity, you'll see some much more reputable Sherlockians than myself. And that previously missing element . . . ladies. The picture, you'll notice, was still in classic black-and-white. 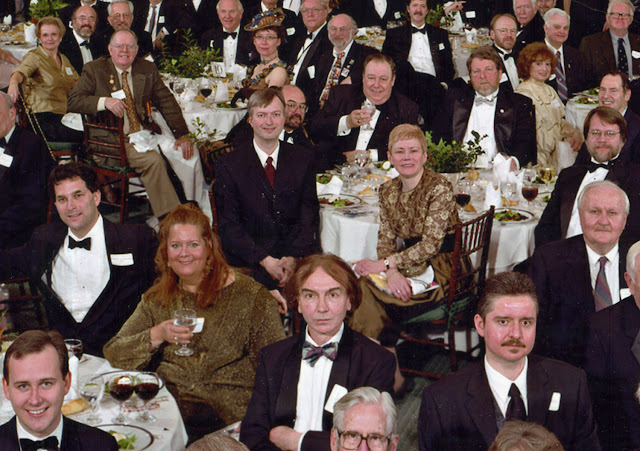 That changed by 2003, and it may have just been to fully capture Scott Monty's boyish charm (lower left), but I think it was more probably to get Susan Rice's scarlet tresses in (Hear them both in this month's I Hear of Sherlock Everywhere! Free plug.). And I can't let this picture go by without spotting Gordon Speck in the upper right corner, a true prince among Sherlockians, who was at every one of these dinners (along with a whole lot of others). I don't know if I'd have ever gotten to New York with Gordon and his partner in crime Bill Cochran.

Forgive me this odd little photo indulgence, whose original point has been long since lost in the meandering thoughts sparked by so many familiar faces. One might understand, however, why my first impression of 221B Con a few years back was a little more positive than my first BSI dinner so many years ago . . . I am, alas, a rather superficial sort and one of those events was a lot better-looking than the other.

Special Postscript for Howard Ostrom: A photo from the first 221B Con in 2013. The rest of the world got a lot younger all of a sudden! 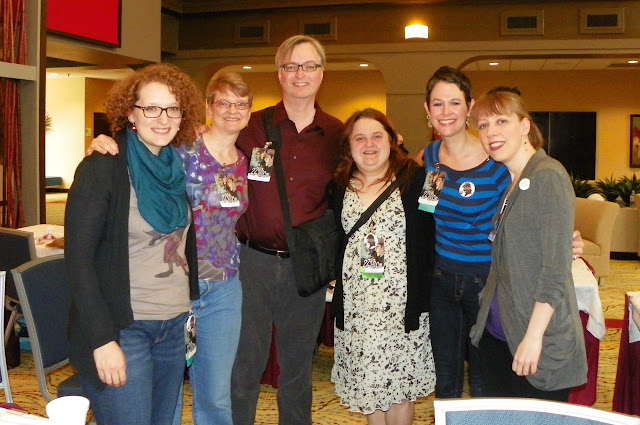 Posted by Sherlock Peoria at 10:12 PM