And then there's always Mycroft. 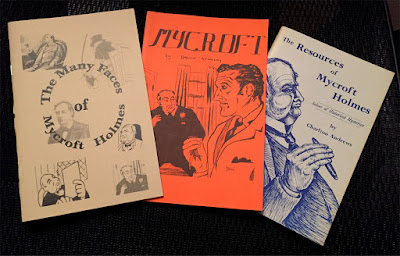 Active in only four out of sixty Sherlock Holmes stories, Mycroft Holmes makes for one of those tidy Sherlockian subjects one can write about without re-reading the whole of the Sherlockian Canon. (Which speaks more to my own laziness than any of the writers mentioned above.) And yet, as Sherlock Holmes's true "smarter" brother, his very existence lights the fires of any Sherlockian fascinated by his little brother Sherlock.

In 1973, when Charlton Andrews' 1903 Mycroft tales were reprinted in a 500 copy edition by Aspen press, the back of the booklet also held "Notes Toward s Bibliography of Mycroft Holmes," a listing of 24 items in print that would make a fine start for the collector focusing on Mycroft at that time. The number of Sherlockian books, movies, articles, etc. on Mycroft Holmes has expanded like the man himself since that time, and an aspiring completist could today build quite a little collection with Mycroft as its theme.

A crypto-historian, wishing to add one more record to that pile, could still delve deep into the life of a man that is largely unimagined where his brother is not concerned, yet so ripe and . . . dare I say it . . . plump with possibilities that no single novel could do it full justice. A man who "occasionally is the British government?" There is hardly a more intriguing character in all of the mysterious mass of words we call the Canon.

When Dorn looked at Mycroft's Many Faces in Y2K, he suggested among other things that Mycroft was the world's first computer programmer. Fans of Ada Lovelace's work in 1842 might find that suggestion a bit off, but that's the thing about Mycroft . . . no one is truly sure of all the pies he had his fingers in. His brother Sherlock had ranged so widely in his knowledges just focussing on crime and its solution that one can hardly imagine where a Holmes whose focus was the whole nation might have held in his brain.

Now that Mycroft has become such a staple of modern Sherlockian television and movies, it only seems a matter of time before he gets to split off into some solo effort in those media. And why not? He's always been the big man, more than big enough to carry his own story.

And just intriguing enough to make us always wonder just what he's up to . . . .
Posted by Sherlock Peoria at 11:55 PM