Now that many days have passed since the many discussions that fill 221B Con each year, I'm finding that certain topics keep coming back to me, certain moments, certain ideas. One of those areas was definitely the discussion during Sunday's "Popularity of the Pastiche" panel with Elinor Gray, Amy Thomas, and Ashley Polasek.

Up front in the session what the question of what defines pastiche, what defines fanfic, and where the lines of demarcation lie.  Is one done for pay, the other for love? How close to Doyle does the former actually have to come? There were a lot of different opinions given, but among all of them, I noticed one thing: no hard lines.

Having come up in a male-dominated Sherlockian culture, I had to smile at that. How many articles had I read over the years in Sherlockian newsletter where someone who didn't write fiction attempted to lay out their rules for writing a pastiche? How many lists of pet peeves had been laid out as cases against pastichery in general? Pastiches, even the best of them, were sensed to have a certain scent of "failed Doyle" to them, and not just to those with perpetually turned-up noses. But that was then.

In these less Doyle-reverent times, it appears that calling one's work "pastiche" over "fanfic" is often a claim of distinction. Which seems a bit silly, because with the advent of a successful modern-day Sherlock making his mark upon the culture, the need to match Doylean prose to capture the spirits of Sherlock Holmes and Dr. Watson seems much less of a priority. The creative cauldron that is the world of fanfic has been dishing up all manner of alternate universes for a while now, and commercial fiction is hot on its heels. Really good non-Doylish works are already beginning to spring up on a regular basis.

Part of this comes from the fact that we are not just a populace of readers any more. Yes, we do read. But Sherlockians who are solely readers and not aficionados of some video Holmes or another are becoming more rare all the time. And the number of new Sherlockians who came to the original Canon via a TV show or movie has grown with every decade. Not only are we not just a populace of readers . . . we are becoming more and more a populace of writers as well. We can't all make television shows or movies -- yes, we have video capabilities on phones, but casting, editing, etc. take a crew -- writing is still the way a lone person can expression their vision best, and there are now so many visions of Sherlock Holmes and John Watson out there.

As the grumbly gatekeepers of pastiche perfection lose ground to the rise of role-play bloggers, fanfic novelists, short story initiates, and all those folk who are happily trying out their words in con writing exercises, our opportunities for more great Sherlock Holmes tales increase. Yes, there will be some awful, awful things. But there have always been some awful, awful things. But we also have more channels for hearing about the good things than we have ever had before. So we will hear about good things, when they come about . . . as they most certainly will.

At the core, however, will always be the original Canon. A bit dated, a bit lacking in certain details we'd really like to see, but a firm starting point, nonetheless. I had a very good discussion with a Sherlockian film-maker this weekend whose web-series, S(her)lock, takes some great liberties with the familiar characters, yet stays close to the actual stories of the Canon as its touchstone. And it works. Changing the stories and keeping Holmes and Watson as familiar as can be works well, too. But if a writer doesn't keep some tether to the original stories, the work strays off and becomes something else entirely . . . heck, Miss Marple could be called "Sherlock Holmes" if you can leave both character and story behind.

These days, however, that happens as the great Sherlockian expansion continues. No one is safe, not even Conan Doyle himself, as Fox TV is about to show America. But the cream will rise to the top, and we hopefully won't have to scoop up from the bottom of the barrel unless we choose to . . . because sometimes that can be fun, too.

But I ramble too much, take it away, Shocked Conan Doyle! 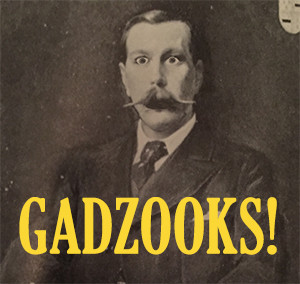 (He just read some more fanfic.)

Posted by Sherlock Peoria at 6:53 AM