Someone else's time with Sherlock Holmes.

Making yet another attempt to clean the Sherlock room this week, I came across an an old box made of sturdy brown cardboard that I hadn't really looked at before. Finding something in your own house that you don't know a lot about may seem strange, but it comes from a part of the Sherlockian life that you never expect, nor ever want to happen, really.

There are the collectables that you search the internet and old bookshops for, and delight in finding . . . those are your collection, a gathering of happy moments in solid form. Even if you just had a link pop up on someone's Twitter feed, went "Wow, I want that!" and followed the link to Amazon for a one-click purchase, there was a discovery and an acquisition that were completely your own.

And then there are things like the sturdy brown box . . . 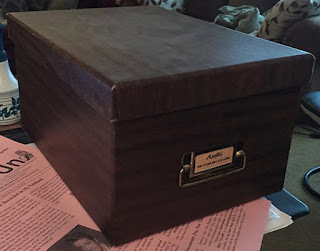 Even though it resides in my home, it will never be mine. I'm just the caretaker of the box at this point. What's in the box?

I've known friends over the years who have come into another Sherlockian's time with Sherlock Holmes, one such notable case was Newt William's re-annotated Baring-Gould Annotated, which I saw after it passed into Bill Cochran's hands. William S. Baring-Gould's book The Annotated Sherlock Holmes has a lot of white space in its margins, and Newt had filled that white space with additional footnotes from his own readings about Holmes. A lifetime of learning went into those margins, and it was a wonder to see. The Annotated, still being a two volume set of books, of course, still fits inconspicuously and neatly on a shelf with other books. But it was still a container for another Sherlockian's time.

This sturdy brown box is interesting in that it doesn't represent a lifetime of my old friend Bob's time with Sherlock Holmes, just an early period of it. 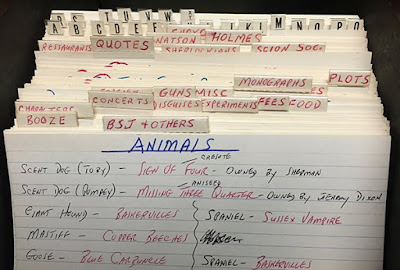 It's full of large file cards that look to me like some artifacts of my own creation, the results of a single pass through the sixty stories where one notes everything of particular interest one finds along the way.  "Booze," "Food," and "Concerts" were some of Bob's favorites, I know, due to articles and scion meeting presentations that came after these cards.

The cards represent a time before Sherlockians with names like Harrington, Goodrich, and Clarkson published their own more massive labors of this sort in concordances keyed to the Doubleday Complete, and definitely before searchable texts like the much beloved Mr. Moon's Moonfind Search Engine. Since these cards were hand-written, many a Sherlockian has also published monographs or books containing such collections of data. (Many of which are hard-to-find collectables now, of course.) It was also a time before personal computers and digital files . . . which now seems like it might as well be Abraham-Lincoln-reading-by-candlelight times, since we've had that tech so long.

But even though the times change, even though other Sherlockians' work on such things have been published and collected, I'm sure some Sherlockians will still re-read the Canon and make their own notes in years to come. Conan Doyle's reluctance to spend all his time writing about Sherlock Holmes blessed us with a manageable-sized Canon, that one can read all the way through in less than a year, even taking time to make notes along the way. It's a marvelous source for original research. And some of those Sherlockians are probably still going to make notes on legal pads and other solid media.

That sort of paper media, and the scribblings upon it, may someday look like Sherlockian minor historical artifacts to some cool, objective pairs of eyes, but to me such things will always be monuments to those Sherlockians' time, happily spent with Sherlock Holmes. Countless hours in the company of Dr. Watson, with his steady narrating voice filling their mental ears. And the love and caring of a fan who took the time to write down their notes of that time.

Such remnants are magical things -- they can even make you feel a little less alone in the universe on a cold and rainy day. But like all magical things, however, their caretaker then has to figure out what to do with them . . . after getting lost in the nostalgia for a while.

Another Sherlockian's time can time up some of your own.
Posted by Sherlock Peoria at 9:52 AM