Picking up a nearby copy of the Complete for a bit of reference last night, I got a surprise run-in with the past. You truly can't judge a book by its cover, as the cover of this particular book was a pretty common old Barnes and Noble edition. 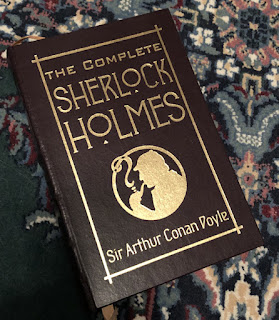 Nothing fancy or unexpected there. In fact, the copy was so seemingly ordinary that I usually pick up one of the two on either side of it, a favorite Literary Guild complete or a well-worn, hand-noted Doubleday that once belonged to a good friend. As I flipped to the index, however, I got a bit of a surprise. The book was signed. Not by Christopher Morley who wrote the preface, or Conan Doyle, of course. It was much too new. But it was signed by every member of a road trip that the book had been purchased to accompany me on. 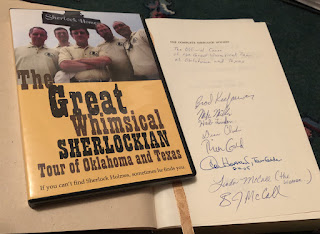 The road trip was a grand idea of Don Hobbs, who made a great effort to have it recorded for posterity in those pre-smartphone-video days, and I'm not going to go into describing it here, but the book made me realize what a great Sherlockian souvenir a Canon can be. Just as a family Bible often holds hidden history, a copy of the Sherlock Holmes stories can become a special souvenir in itself -- and one you can use for other purposes. (And maybe other souvenirs.)

I have a couple of other souvenirs from that trip that serve no useful purpose, other than to sit out and take up shelf space, a jar of dirt from Sherlock, Texas and a discarded railroad spike . . . 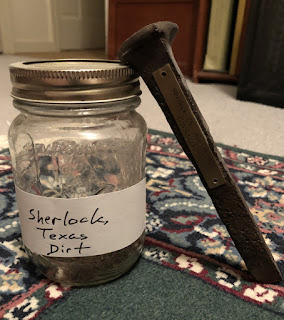 . . . but I think I like the autographed Canon better. It shares the names of all who were there when it was used, and sparks a few more memories than dirt or metal.

It's often said that books take us places, but returning that favor and taking a book somewhere might pay its own dividends later on . . . and maybe even surprise you. This one caught me as I was just about to plan a trip later in the year, to another place I've never been. And made me think that maybe I should contemplate which Canon I decide to let come with me on that trip.
Posted by Sherlock Peoria at 11:06 PM