Funny thing about we humans, there are so many of us that we tend to retrace our steps as a species, over and over again. If you're paying close attention, just about the time you think you've found someplace no one has been, you spot some ancient initials carved into a rock face.

Lately I've been pondering the Sherlock Holmes multiverse. The alternate realities for Sherlock Holmes which authors were creating long before their amateur counterparts coined categorized fanfic as "AU." The many alternate John Watsons that Conan Doyle accidentally channelled in the multiverse records we call "the original Canon." There's a panel on one part of that coming up at 221B Con, and another talk that I'm hoping to convince another venue to go for. And I was pretty sure I had something new to say.

A bit of closet cleaning however, and viola! 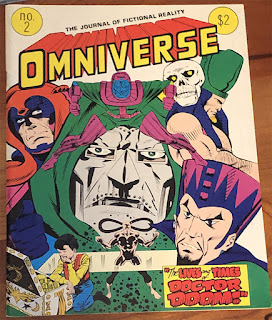 Omniverse magazine, issue two, "The Journal of Fictional Reality," turns up in a box of Sherlockian magazines. From the cover article on Doctor Doom, one might imagine the magazine likes to focus on comic book realities most, and one would be right, at least in this issue. But on page 38 comes an article drawn mostly from a non-comic sources, "The Case of the Divergent Detective," by Meloney M. Crawford. 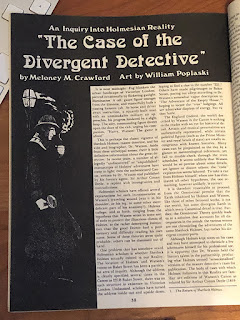 The article, for non-Sherlockian audiences, begins with an intro the the basics of Holmes lore, telling of Sherlockian scholars and their vexations with tying Holmes and Watson to our reality. It also mentions that wave of 1970s "undiscovered" or "unpublished" Watsonian manuscripts. After running through all the Sherlockian basics, Moriarty, Mycroft, wounds, wives, etc., it starts addressing the post-Canon Holmeses with The Exploits of Sherlock Holmes by John Dickson Carr and Adrian Conan Doyle. It finishes its consideration of that collection with "we must not conclude that the Exploits collection describes the same Holmes as does the Canon.

Richard L. Boyer's The Giant Rat of Sumatra is considered, along with Manly W. Wellman and Wade Wellman's Sherlock Holmes and the War of the Worlds, the latter of which is definitely an alternate universe, according to Meloney Crawford. Sherlock's romancing of Martha Hudson and Watson's character of "a prodding, prudish fool," both place it firmly in that category.

Phlip Jose Farmer's The Adventure of the Peerless Peer gets a similar roasting: "It is fair to say that Watson did not indulge in profanity; nor was Holmes prone to violent airsickness and terror, or to prancing about naked smeared with mud." Baring-Gould's work is seen as intriguing, and Nicholas Meyer's work is seen as another alternate Holmes. Comic book appearances by Holmes in the Marvel and DC universes are considered at the last, and the piece ends with the words:

"As we have seen, there are many possible turns in the Holmesian tradition. We have opened just a few doors in a maze of alternate paths purporting to be but one. We may be assured, however, that Holmes and Watson remain immortal . . .  not only in our memories, but in the incalculable mirror-images in the labyrinth."

So in 1979, Meloney M. Crawford was already proposing exactly what we're going to be discussing in the "Sherlock Holmes AUs before they were AUs" panel in two short weeks in 2019. A full forty years later, and what a forty years it has been! If, by some strange quirk of fate, Meloney turns out to be a 221B Con attendee, I hope we can convince her to join us, but I suspect that possibility is slim to none.

Still, I am glad to be headed to discuss the topic knowing we had such a pioneer far ahead of us. I hope we'll do her proud.
Posted by Sherlock Peoria at 4:29 PM