Irregulars having a little fun 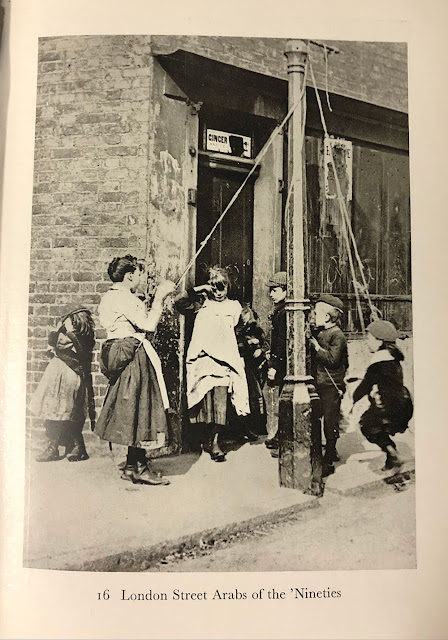 I stumbled upon this picture this afternoon from a 1937 collection, and it seemed appropriate for the week ahead, as Irregulars of regular and irregular stripes hold their own celebrations of Sherlock Holmes's birthday. The kids in the picture are having their own streetlamp party, and they well could have been among the ranks of Holmes's own lot.
The book it is from, Victorian Panorama by Peter Quennell, seems to have made it to Peoria from Glasgow, bearing the marks of "Baillie's Institution" that it seems to have been liberated from at some point. Conan Doyle's uncle gets a mention in the book, as well as Conan Doyle, but no Sherlock Holmes, just "The dense yellow fog that plays so important a part in the romances of Jules Verne and Conan Doyle had not yet lifted." Sherlock Holmes would probably give a bit "I told you so!" to Watson, were they to stumble across that line -- Romances!
But we get to see how Irregulars might have amused themselves when not hunting up people, cabs, or boats for Sherlock Holmes. The book is full of pictures of Covent Garden flower-women, Scottish fish-wives, shooting parties, and the like, as well as the occasional celebrity. 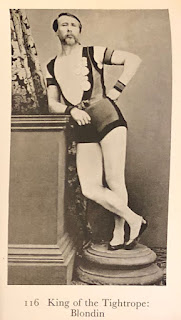 Did Holmes pose as smugly as Blondin, after doing his impersonation of the "King of the Tightrope," as that fellow's photo shows? I wouldn't have put it past him. And if Holmes wants to strike that pose again this week as he celebrates one hundred and sixty years of life, he certainly deserves it!
Posted by Sherlock Peoria at 10:21 PM