We haven't had a good gentleman thief in a while. Especially one with a history involving Sherlock Holmes. Or "Herlock Sholmes." That's why it was a nice little treat to discover Lupin on Netflix on the same night I broke open my new "Piecing Together the Canon" jigsaw puzzle from Baskerville Productions. 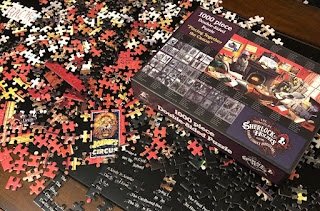 This new Lupin is inspired by the original fictional character by Maurice Leblanc from the early 1900s, who put Sherlock Holmes in his Arséne Lupin stories until Conan Doyle griped and Leblanc had to change the name. It was an ambitious goal -- putting one's main character, a criminal, up against the greatest detective. The best of the gentleman thieves pull off their elaborate heists with flawless perfection, and even when the plot is uncovered, slip off to some distant beach or other sunny shore. And Sherlock Holmes doesn't really mesh with that.

The closest thing to a gentleman thief in Sherlock Holmes is probably John Clay of "Red-Headead League." He has a truly wonderful heist planned, and could well have been off on that distant shore with a fortune to live out his days on . . . well, if not for Sherlock Holmes. Professor Moriarty is supposedly the master planner, but we never see those plans, and he distances himself far enough his crimes to lose any cool factor associated with them. (Did he plan John Clay's heist? He's certainly never getting credit for it if he did, Granada not withstanding.)

The thing is, Sherlock Holmes is closer to the gentleman thief than any of his opponents. He is the gentleman detective, who, occasionally might dabble in crime as needed. And he pulls off his solutions to cases with the panache of a gentleman thief finishing a heist, both very similar to stage magicians in their doing the seeming impossible, but without that veneer of false wizardry.

Side-topic: It's interesting to look at the place of Penn & Teller among stage magicians. While others encourage the thought that they might be performing "magic," the Las Vegas duo never leave the audience without the sure knowledge that it's merely trickery and stagecraft, on purpose. Sherlock Holmes would approve, I think, passing up so many chances to be thought of as a worker of miracles. But back to gentlemen thieves.

No, let's switch to two-sided jigsaw puzzles. Sounds ridiculously hard, the two-sided jigsaw puzzle, if one has never attempted one before. Seems like it would take a veritable genius, a wizard of jigsaws to solve one, right? Take a close look at the picture above. Notice how the pieces are, for the most part, in color? One of the sides is in color, which makes the job a little easier. Yet there are still completely black and white pieces on the color side. But given the two-sided jigsaw puzzle, one quickly notices a detail that one ignores on a standard puzzle: the cut. On the front-facing side, the cut rounds down. One can tell one side from the other simply by touch . . . at least in this case.

The benefit of the two-sided jigsaw puzzle is that it's two Sherlock Holmes puzzles in one, and that's still a pretty cool thing. And like a Sherlock Holmes mystery, not as impressive once certain facts are explained to you. Also, doing a puzzle on a topic one knows well is always good fun, as that little extra edge of going "This 'Bos' piece definitely goes with the 'comb' piece!" makes for some pleasant moments.

So it's Lupin and Sherlock Holmes puzzles for more than a few evening's entertainment for a while.

Posted by Sherlock Peoria at 6:17 AM