Once more into the breech 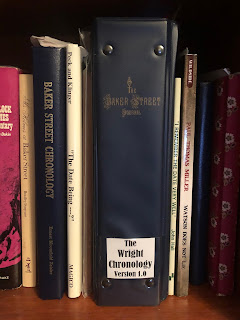 Since I was starting work on another run-through of the Canon to settle my little chronology issues, and maybe produce something of worth, I had to do a little gathering of the work of one of our great modern chronology experts, who had mainly published his previous work in the local club newsletter about ten years ago. Vincent W. Wright was kind enough to supply me with the missing bits I didn't have, and once I had gotten it all in order, the next step was finding a place to put it, and putting it on a bookshelf -- though it's not going to stay there long. My own gathered tome doesn't fit there nearly so nicely. 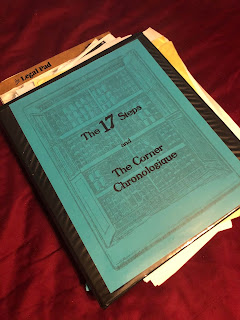 Chronology work is, at the same time, both arcane and absurdly simple. Much of it is treading over the exact same ground as every chronologist that came before. Same-old, same-old, same-old, yet perhaps it's that aspect that makes one always think there is something new to offer. And as it contains classic Canonical questions that will, as with all classic Canonical questions, never have an answer that will satisfy all of us, the challenge remains eternally open. It's the quiz beyond all quizzes. The chance to pit one's Sherlockian powers against the ancients of the cult, to put it at its most grandiose. But also a chance to connect with one's peers and see how they're doing with that same little puzzle.

It's a great solitary activity, but the fact that there are no absolute answers means there are no winners in this game. No one gets to stand above all others when it's done. Time to make this more of a group activity? And how would that even work with so many of us being particularly solitary in the sort of personality that gets draw most to such things.

Posted by Sherlock Peoria at 1:24 PM