The puzzle after the puzzle

Jigsaw puzzles have become a new fancy during the pandemic, and Baskerville Productions came out with one just in time for mid-winter distraction. (My verbiage seems to be a bit tainted by watching Bridgerton at the moment, so forgive me if I get a bit courtly.) 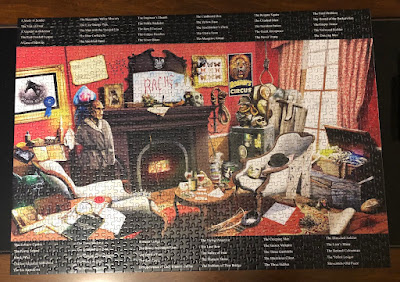 After a week or so of work, I finished the first side of "Piecing Together the Canon," a lovely picture of what is either 221B if Sherlock Holmes was a trophy collector or the room of his greatest fan, populating it with items to remind themselves of his sixty cases. But are all sixty represented? The titles around the edges, yes, but in the artwork itself?

Having finished the puzzle, I printed out a list of the full sixty and began to tick them off.

At lunch today, I found thirty-nine of the stories in the picture, and have to admire the work it takes to visually represent some of the tales. You find yourself going, "Why is that lamp so smokey? OH!"

When I get back to it, I think I'll have to bring a magnifying glass, as there's a letter with writing so small that I can't quite read it with my normal vision. And I swear some stories get referred to more than once, so I might have to go back to the Canon to double-check those second, less-obvious references to see if they don't point to a different story. (Detailed knowledge can sometimes be as much a hindrance as a help.)

And if this second puzzle-after-the-puzzle wasn't enough, there's still the other side of the puzzle to do once I've finally decided to take this one apart. (Of course, I did solve some of it already -- the benefit of a two-sided puzzle was that if the all-black parts with no pattern were a little hard, you could always flip those areas and solve them with the easier side, then flip them back.)

Sherlock Holmes did like his puzzles, but even though jigsaw sorts of puzzles were invented in the 1760s, and "jigsaw" puzzles became a thing in the 1880s, Holmes was probably too busy with detection to waste time with one until his retirement. And even then, they didn't really hit their stride until the Great Depression in the 1930s, so maybe he never got to them.

But their mysteries can still be a good thing for the student of Sherlock Holmes, having done two about him in the last few months.

Posted by Sherlock Peoria at 12:49 PM