This is the time of year for joy and disappointment among the elder generations of Sherlock Holmes fans -- the arrival of those rare and exclusive invitations to the annual dinner of the Baker Street Irregulars of New York. How does that invitation process work? Here's a flow chart from the current head of the group: 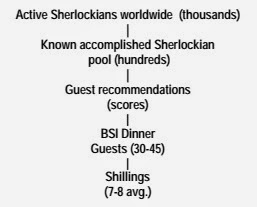 Once all that has taken place, and the entire world's population has been whittled down to a number of two or three digits, the current commander-in-chief of the Baker Street Irregulars takes over and decides who among that list is invited to the annual New York dinner, and then who among that list is handed a shilling of membership.

For the past twenty-nine years, that membership and invitation list has been held at what is considered an optimal level by one of two individuals, serving successively as gatekeeper to the club. It's one of those pope in Rome, king on his throne, el dictador en casa, sort of situations that some folks feel good under, and others, not so much.

After twenty-nine years of a hand-picked membership by the single leader, one has to wonder if a more democratic membership process might be entrusted to that select body. But then again, perhaps they're all pleased with the status quo. There's a tradition there, but as we all know, it was once a tradition to only let one woman into the dinner and then throw her out after the cocktail party until 1991. Traditions are slow to change. ("Like turning a train," according to one wise soul much younger than mine.)

Yet at this time of year, an elder Sherlockian who isn't into such things still finds himself pausing to think about them.
Posted by Sherlock Peoria at 5:37 PM