Last night, nine members of Peoria's Hansoms of John Clayton met in the heart of the Uplands district of Peoria near Bradlley University to discuss "The Adventure of the Golden Pince-nez."

As usual, the conversation was interesting and wide-ranging: cocoanut matting, Houdini, and the perpetual "What the heck is a pince-nez?" The odd way the story sort of peters out at the end . . . we didn't hold a lot of hope for Anna's "friend of the heart" in the Russian prison. A good mix of knowledgeable Sherlockians and interested neophytes, all who had read the story and had thoughts to add to the mix.

On a side note, the truly devoted Sherlock Holmes fan might want to get coconut floor mats for their car as a tribute to "Golden Pince-nez." The internet brings us such a marvelous variety of things, doesn't it?

Good conversation, good food, good drink, great hosts, and a kitten and a cat. Simple pleasures are what make a good meeting for a local Sherlock Holmes society. And then there's always a rival Sherlock Holmes club, just to prove you're doing things right.

In addition to last night's meeting of the Hansoms of John Clayton, Peoria also saw the re-boot of the Hansoms' rival Sherlock Holmes club, the Buses of Mrs. Tangey, not heard of since 1981 and a report in Wheelwrightings entitled "The Difference Between a Bus and a Hansom." While the Hansoms have their traditional "Clayton Ritual" based upon the Musgrave work of similar name, the Buses had their own responsive reading that goes like this:

The Tangey Ritual
by S.M.

What was her name?
. . . Beatrice Tangey

From whence did she ride it?
. . . Out of the Foreign Office, Charles Street, Whitehall.

And what would Scotland Yard get out of her?
. . . Nothing, alias Lestrade's brain, alias Watson's tea-totalling.

When the Hansoms first heard of this group and their ritual, it was based on a single encounter on a bus, but now, thanks to the wonder of social media, we now have an actual photo of some members of that Sherlock Holmes club, seen below. Enjoy! 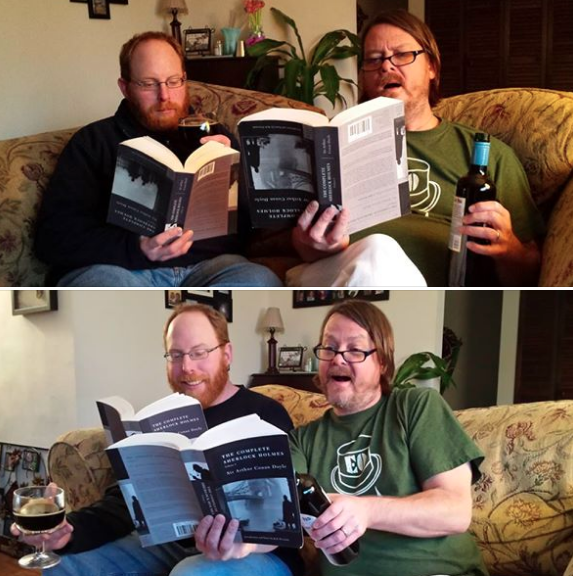 Two members of the Buses of Mrs. Tangey
Posted by Sherlock Peoria at 10:28 AM