Cards and Sherlock Holmes, always with us.

Sherlock Holmes was always more of a card player than a chess player. As much as the chess fanciers among us might like to think otherwise, Moriarty was the chess player. Holmes's words and actions on the subject reveal him to be more of a card man. So when the first Sherlock Holmes card game came out in 1904, a couple of decades before Conan Doyle was even done writing . . . well, it was only fitting. 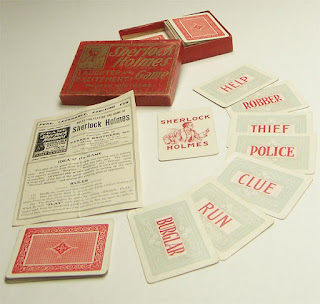 It's a pretty simple game, and when you own a card game from 1904, you don't really play it too much. Oddly, no one has made a playable facsimile yet . . . don't know if patents/rights/copyrights run out on games as fast as literature, so perhaps Parker Brothers is still sitting on that one.

In any case, there are still a load of cards to play with that have to do with Sherlock Holmes if you don't want to handle that one too much. I think I have a a few versions of the standard 52-card deck done Holmes-style . . . . 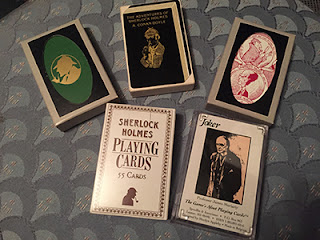 Turns out I have at least five. I used a couple as raffle tickets at the first 221B Con, because . . . well . . . . they just seem like a plentiful commodity.

Sherlock finds his way into other card games, like that Superfight! card I mentioned in an earlier blog, and last year's 221B Con, when I got to play Nea Dodson's custom BBC Sherlock Fluxx.

What has started to intrigue me now are Sherlock Holmes card games where the decks are designed to play a particularly Sherlock-y game. There's apparently a 1991 Sherlock Holmes: The Card Game where unmasking villains is the goal. And there's a 2013 award-winning game called "I Say, Holmes!" that's gone into a couple of editions. Both are a bit pricey for card games, and you could probably find a copy of the old Sleuth card game that featured Holmes's profile without his actual name in an antique store for cheaper. And it's been around a while. But someday I'll pick them up and see what fun awaits therein.

Because I love card games. They're easy to carry around, don't have the massive rule books of so many of today's board games (as often, anyway). And cards are just fun to deal, fun to hold, fun to slap down on the table when you make your move.

Before I get around to getting one of those, though, I'm starting to think I'm going to come up with my own Sherlock Holmes card game. I've got the basics of a game mechanic in my head, and am going to develop it a little further once I get some time. It's a little counter-intuitive to the usual way one might approach a Sherlock Holmes game, so I don't think it'll have been done before. When it gets going, however, you'll be the first to know.

In any case, invoking Sherlock Holmes via playing cards is probably one of our most Canonical ways of summoning up his spirit. Few of us will ever investigate a murder. And having a roast beef sandwich on the go, like he stuck in his pocket in "Beryl Coronet" is just too easy. (It makes the Arby's drive-thru Sherlockian . . . sort of.) But playing cards, as Holmes hoped to do in that "Red-Headed League" stake-out in the bank vault, is a nice way to touch the spiritual hem of the Master's dressing gown now and then, so to speak.

And cards are going to be with us for a very long time to come.
Posted by Sherlock Peoria at 10:32 PM