Left Coast Sherlockian Symposum: And Into The Night . . .

Well, I'll be honest with you: My great flaw as a Sherlockian weekend reporter is that I always miss something. This time, I over-extended our afternoon break, got caught up in an conversation in the hall, and missed 75% of the final speaker of the day, Dr. Bruce Parker on "Sherlock Holmes and Medicine." I heard later that the biggest takeaway might have been that a 7% solution of cocaine was pretty weak stuff.

After the day's program was finished, I recorded a little podcast material with Robert Perret, then went up to dress for dinner. SyFy channel was showing the return of the Banana Splits, only horror (?), and as a card-carrying member of the Banana Splits Club since the 1960s, I had to resist the temptation to see what was going on there to head down to dinner.

The trend toward fancy dress balls finally saw me attending one in something close to fancy dress. (Hey, I put on a vest!) And soon I found myself dining at another table full of Sherlockians. The conversation was far-ranging, and often very personal. We've had some really thoughtful and illuminating presentations so far, and are all looking forward to more tomorrow. Getting a good table of Sherlockian dining companions is always one of the great pleasures of our hobby, and . . . well, I think I'll leave it at that to protect the innocent. (Not that anyone was guilty, of course.)

We were called away from our happy dinner table (Oh, the buffet was a nice change, by the way -- build your own burgers and salads with some really nice options, and good dessert choices.) to go see the historical conjurer, Professor D.R. Schrieber, who put on an excellent show whilst demonstrating the sort of effects one would have seen in the century of Holmes and Watson. 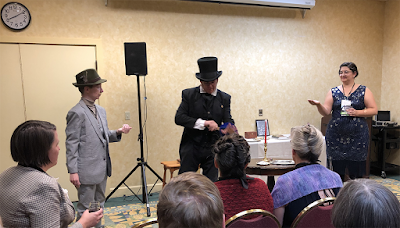 Here he is with Elinor and Kris, turning seeds into roses. 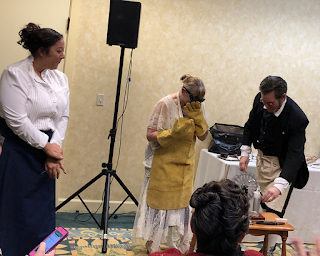 And here poor Fran was about to run some sparky Victorian electrical device to send a message via fruit in his show-closer effect. The professor put on a delightful show of both impressive effects and education on magic of the past.

Once that was done, many of us headed a few rooms over to where the seances were being held. Two mediums were contacting the spirit world in a more modern method than the glowing-ether and spirit-writing of Conan Doyle's time. Sitting in a quiet circle waiting for the mediums to see spirits coming to pass along their messages of comfort is a time when you can't help but think of those who have passed on, or one's personal philosophies of what happens after we die, and it can get a little emotional, even if you aren't connecting with any of the spirits the seers are calling out. It went on a little longer than my midwestern body clock would have liked, and sometimes I might have been closing my eyes with a bit more sleepiness than meditative thoughts of those passed.

And now I've stayed up much too late to report on this, but I've got to say, tomorrow should be a very interesting day. On we go.
Posted by Sherlock Peoria at 1:06 AM