There was applause and cheers as Elinor Gray stepped up to the podium and opened the first Left Coast Sherlockian Symposium. The brand new event had packed as many people in as it could hold (well over a hundred), the dealer's had been open for an hour, most of us had already mingled at the hotel breakfast, and we were off and running.

Robert Perrot had the lead-off spot, asking the question "Is Sherlockian Scholarship Scholarly?" asking us to define scholarship and scholars. Going into the concept of "citizen scholarship," he quickly brought up Ronald Knox, the "stud-muffin" of early Sherlockiana. (That's a quote.)  The projector as a little close to the screen, making some of the graph text a little small for the very back of such a very long room, so Robert had to describe some charts, but he did well at that. 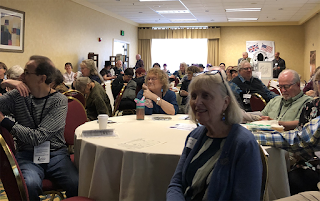 As he got into his survey of Sherlockian articles across the history of The Baker Street Journal, he gave us some fascinating overviews of things done. "Speckled Band" is the most cited story. Most writers for the BSJ publish once. One author wrote two articles, 55 years apart. Author professions -- academic tends to lead, business folks rose to prominence in the 1950s and 1960s, and high schoolers got a good showing. When this talk gets published somewhere, it's going to be a must-read!

Good lead-off talk, leaving with folks wanting more. Proud to have Robert as a part of The Watsonian Weekly. Sounds like his slides will be going up on the symposum website, so look for those.

Sonia Fetherston and Julie McKuras are up next, so it seems Robert was the warm-up for the party really getting started with "Nevertheless, She Persisted: Women Who Broke the BSI's Glass Ceiling." Not sure how they became a tag-team, buddy-cop presentation duo, but I'm sure we're about to be the better for it.

Julie steps into the ring first, leading off with the actress who should have been a BSI but wasn't, thanks to her gender, then getting to Katherine McMahon, the best known woman who completed Christopher Morley's crossword puzzle that supposedly got one entry into the BSI, but again, didn't due to her gender. Still, she led a great Sherlockian life. Edith Meiser, the actress and writer, who was key to getting Sherlock Holmes on radio in America is up next, and actually was also key in America getting the Doubleday Complete, a cornerstone of American Sherlockian life. Meiser was on I Love Lucy as Ricky's boss's wife? I didn't know that!

Helene Yuhasova, the poet laureate of the BSI, who ran into the trouble with the red scare of the 1950s,  is spoken of, as is Kathleen Morrison, Calgary's "Lady She rlock" who wrote a twelve page biography of Watson in the 1940s, but couldn't get into most Sherlockian societies of the day. Man, this is not a talk that makes me respect the BSI any more, but Sonia is tagged in next, and we'll see if she can bring things upward as she moves from the 1950s forward.

Mystery writer Lenore Offord, described by Sonia as a combo of Eleanor Roosevelt and June Cleaver, got nominated for the BSI and got an investiture in absentia, from Edgar Smith with what is believed to be a quiet deal to never attend a meeting. Ruth Berman and the "Albertus Magnus Six" bring us into the sixties, and we're given to ponder how much more Sherlockiana Ruth would have written had the BSI been co-ed back then. Lisa McGaw, who reorganized and polished the William Gillette luncheon into a successful standard of the annual New York weekend, got to be the second not-to-attend membership into the BSI. She expected to attend, and never got an invitation, or got to attend, dying before the one dinner she was about to be allowed into. So sad.

By the time we get up to history as I lived it, I'm still not loving the ol' BSI, but at that point we're into my personal scar tissue, so the list of women that are finally allowed in during that first real break in the men-only policy seems hardly to make up for all of that crap that came before. 1991 might be ancient history now, but it wasn't that ancient. The names of the women who got into the club are all familiar, and the grand old institution of American Sherlockiana should have been more honored to have them accept membership than they honored to be let in. It makes me kind of glad that the BSI shilling doesn't seem quite as important to the up and coming generations of Sherlock Holmes fans.

Good wi-fi in this hotel, so I'll try to keep blogging as this goes for those of you who couldn't make it but still wonder what's going on.
Posted by Sherlock Peoria at 12:50 PM