Sherlock Holmes versus the Joker

With that different sort of Joker movie in theaters the last few weeks, it's odd that I didn't think of that time that Sherlock Holmes beat the Joker, back in 1976. And beat him in his own comic book, no less! 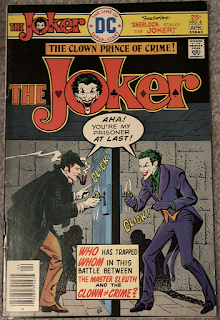 Last month, I was writing about how Sherlock Holmes showed up in two 1978 DC Comics Batman stories, where Sherlock was a mysterious spirit, but in 1976, the Sherlock faced by the Joker was a little more solid . . . which the Joker did not expect at all. 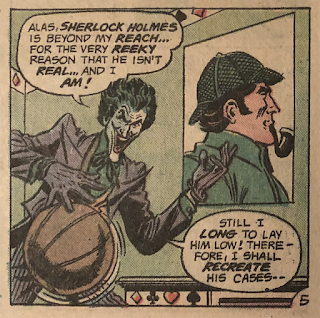 Basing his crimes on the Sherlock Holmes stories, the Joker's first move was to steal a framed picture of Fran Carfax, the woman who played Irene Adler in the play Sherlock Holmes at the Bohemia theater in Gotham City. The Joker's big mistake, however, was shooting a boxing glove at the actor who played Sherlock Holmes, Clive Sigerson, and then bashing him on the head with his calabash pipe. Sigerson, already confused by the Joker having infiltrated his play disguised as Moriarty, starts to think that he actually is Sherlock Holmes. The stagehand assigned to keep him out of trouble is "Dock" Watson, and the game is afoot.

Curious fact from this comic: The Joker owns a copy of The Complete Sherlock Holmes. And he's really acting like a completely avid Sherlockian in this story, seeming to pick the "Red Circle golf course" to kidnap J.B. "Red" Wilson, the head of an Air Hockey League, but really just settling for the flag from the fourth green as "The Sign of the Four." Not sure why anyone cared about the Joker as a master criminal if he was just stealing single flags from whole golf courses or individual pictures from theaters. (Or how he paid his goons with those crimes.) 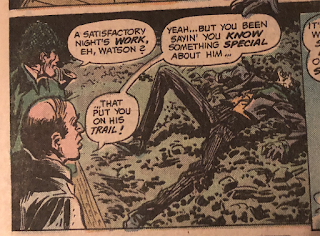 "Whether I am Sherlock Holmes or Clive Sigerson, the Joker is Professor Moriarty," Sherlock tells Watson, "and Holmes can always deduce where Moriarty will strike! A simple 'Case of Identity,' Watson!"  and with that, the story ends. The Joker is lying unconscious, we don't know where Clive/Sherlock's head is at, and next month Joker fought Lex Luthor, and Sherlock didn't appear again in the remaining four issues of the series.

What does this all have to do with the social commentary of the Joker-as-loser-social-reject version Joaquin Phoenix brought to theaters this month? Well, if a stage actor who thinks he's Sherlock Holmes could take out the one who gave Batman so much trouble, I don't think we have to be too worried about that one, despite the cult following he gets by movies end.

Seems like we know someone else who has a cult following as well.


Posted by Sherlock Peoria at 2:35 PM