So I had this moment once. This good, good moment.

It's hard, even for those of us who lived it sometimes, to re-imagine the world of 1980s Sherlockiana at this point. The internet and how it turned the BBC Sherlock boom into a fannish nuclear blast changed the landscape as dramatically as any future apocalypse, but, for most of us, in a good way. Opportunities are abundant, my friends are all seeing their work published in book form, and you can read as much Sherlock Holmes as you could ever possibly want off a device you carry in your pocket. It's a different world.

Who is the greatest Sherlockian alive today? Who the hell knows! As with music, movies, literature, and every other art form, we have access to so many artists that no one has a clear view of the entire vista to make such a pronouncement with any authority. Ask a hundred Sherlockians, you could potentially get a hundred different answers. But in the 1980s, things were different.

For so many of the Sherlockian "children" of the 1980s, there was but one obvious leader of the Sherlockian pack, and his name was John Bennett Shaw. He was our celebrity fan, whose workshop weekends were like a concert tour of your favorite band. If you could go, you went.

While doing some other research this morning, I came upon one of the letters I got from Shaw back in those days. (He was great with letters, one of the reasons we loved him so.) He wrote it on April 2, 1988, and he wrote it because he had just read my brand new book, The Elementary Methods of Sherlock Holmes. A book I had spent the better part of a decade working out, a book that I felt filled a void that existed in Sherlockian writings at that time, and my very first book. 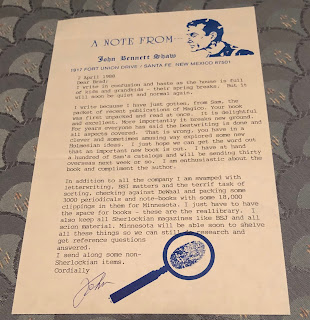 Shaw was, as Shaw was, kind and encouraging to a young-ish Sherlockian. (I had just turned thirty-one -- not young for most fandoms, but in Sherlockiana of the 1980s? I was a baby.) But to have the Sherlockian of the day come and and say that I had accomplished exactly what I set out to accomplish with what I had written --  what any writer wants, to have another person get what you're trying to say -- well, it was a glorious thing. I count it among the best moments of my Sherlockian life, right up there with walking into the center of the first 221B Con and going, "Look at all these people!" A Sherlockian life spoils you with moments, but this was one of my favorites.

Looking at the letter now, it's also a wonderful thing to see that it wasn't just my moment, it was a moment in our Sherlockian history when Shaw was deep in preparing things for Minnesota, and the grand collection that the university there was developing. John Bennett Shaw's greatness as a Sherlockian wasn't that he just wrote one book, one poem, started one club, all those things we typically associate with Sherlockian achievement. It was his thoughtful care and kindnesses to other Sherlockians and the hobby itself. He was as much a gardener of Sherlockiana as a collector of it, planting seeds, tending to the soil, and . . . on occasion . . . weeding a bit.

His example is something to think about as we move through our fandom careers. While we might not be able to hit that level entirely, sometimes something as simple as a single letter, e-mail, or tweet can mean so very, very much.

Posted by Sherlock Peoria at 11:25 AM