You see, I have this very silly collecting tic. And another find wandered my way as a book sale was being set up by someone who new my avocation. 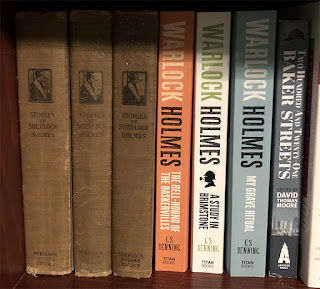 Three finds actually. Those first three. Conan Doyle's Best Books. A three volume set of very common American editions published by P.F. Collier in 1904. The first two have Sherlock Holmes stories, but the third doesn't, despite the spines of all three stating "Stories of Sherlock Holmes." 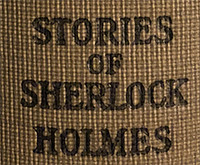 Even the one with The White Company and Beyond the City. They're a curious set, collecting some curious things. All sorts of Conan Doyle stories, illustrations by Frederic Dorr Steele, an essay by Conan Doyle class-mate Dr. Harold Emery Jones called "The Original of Sherlock Holmes." And P.F. Collier must have sold a lot of these suckers, because as they collected all sort of stuff, I've wound up collecting all sorts of them over the years. 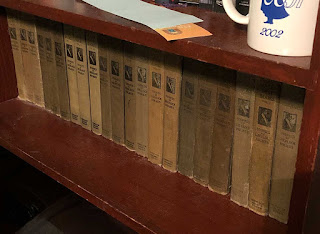 Blame the rise and fall of the antique mall. They were everywhere and very cheap. The problem is, you start to take things for granted. "Oh, just more collections of Sherlock Holmes stories." And you don't look too close at what's inside. Until one night you do. Annnnndd, this . . . 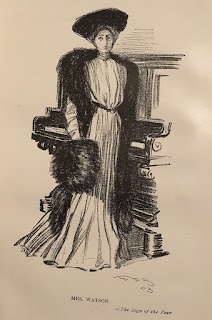 So I grab up a reprint of The Return of Sherlock Holmes featuring the American illustrations by Steele, and what do I find? 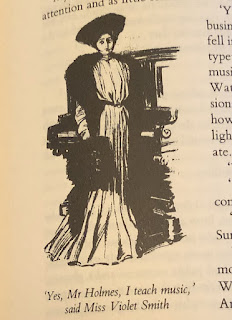 Violet Smith, the solitary cyclist. Now I had heard rumors of folk who identified her as a prospective Mrs. Watson, but I never really knew why until tonight. Someone in the book layout department at P.F. Collier's in 1903-1904 decided that Violet Smith made the perfect Mrs. Watson and shipped her right into the actual Canon's illustrations that way.

Both of these illustrations have been in my library for thirty years, but it took getting one more duplicate tonight for me to put the two together. Now Violet Smith will be a Mrs. Watson to me for the rest of my life . . . I mean, somebody in 1903 seemed to know it to be true, right at the time Watson deserted Holmes for a wife. Was someone at Collier's actually trying to tell us something that Watson's agent was keeping hushed up?

I've heard worse theories, when it comes to the good doctor!
Posted by Sherlock Peoria at 9:45 PM