At some point late last year, in that time between my birthday and Christmas, I was feeling rather generous with myself and Kickstarter-ed a book project, The Curious Book of Sherlock Holmes Characters by Mike Foy. Even with update emails notifying me of its progress, success, and mailing, I was still left wondering when a very large and heavy package arrived from Florida yesterday, just as I was about to go pick up some Asian to-go for dinner.

I wish I'd have grabbed a pic of it before unwrapped it, as it came much like past Baker Street Almanacs, with a ribbon that tempts you to remove it without destroying it -- this one, however, had a Sherlockian wax seal at the cross-section of the ribbons, so even my practiced ploy of sliding the ribbons did not fully stop its destruction. The ribbons and the cloth map of London that wrapped the book came off, at which point I found I had purchased a coffee table book.

The Curious Book of Sherlock Holmes Characters is the size of a high school textbook, and the ornamental metal corners definitely make it a book for laying out and not shelving with others, lest it rip at them like an evil race car with those spike hubcaps. And if that metaphor seems a bit harsh, look at what the book immediately started doing . . . 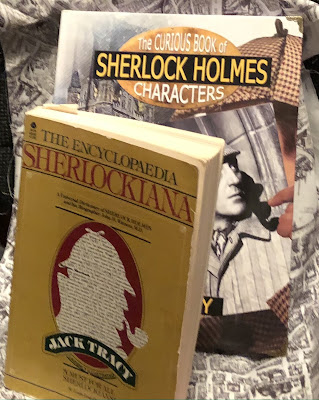 Yes, it started creeping up on the smaller paperback edition of Jack Tracy's The Encyclopaedia Sherlockiana. Now, I'm not in favor of books that bully other books, but I knew from the start that these two books were going to be at odds with one another. They immediately pulled out their entries on Paul Kratides and started to go at it. 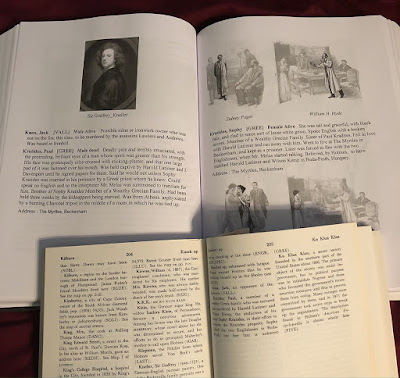 Curious Book immediately pointed out Encyclopaedia's lack of pictures, and the sexism in the latter not giving Paul's sister Sophy her own entry.  Encyclopaedia mocked Curious Book's great amounts of white space and using the same picture twice on the same page just to highlight different characters. After that, things turned nasty, and in my head, I could hear Curious Book calling Encyclopaedia's author a mother-killer and I had to separate them before Encyclopaedia could retort or pull a knife.

Even then, the back and forth kept going. "You're out of print!" "Ever hear of a bookstore?" The hardcover of the Tracy book tried to step in, and Orlando Park's double-dustjacketed Sherlock Holmes, Esq. and John H. Watson, M.D.: An Encyclopaedia of Their Affairs tried to jump in on the side of The Curious Book of Sherlock Holmes Characters, as it has had a grudge against Encylopaedia since that book first insulted it in its introduction. Who's Who in Sherlock Holmes and the Bunson Encyclopedia Sherlockiana, both paperback and hardcover, moved in and suddenly things started to turn into a prison-yard brawl, the klaxons went off, and the whole library went into lockdown.

It would be nice to simply be able to review a book without all this conflict, but these old Sherlockian book-prisons are just full of trouble. I envy newer wardens who can bring a brand new book in like this and just let it be what it is: A useful result of hard labor that one can get some work out of, without some other book knocking its ornamental metal corners off just for spite, as has happened twice.

And despite all of the above, I'm pleased with this new addition to the library, bit of a luxury item that it is, and I think I've found a spot for it where Tracy won't bother it for now. I'm hoping that thinking it's being held up by even larger books will keep it in line. 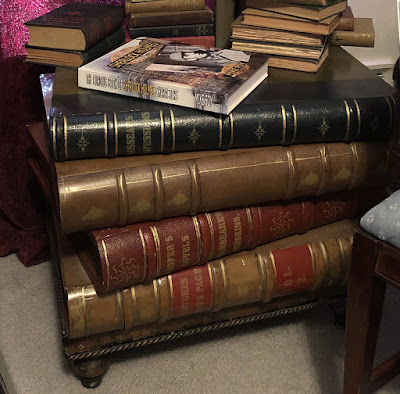 Posted by Sherlock Peoria at 9:44 AM