There's seven hours of programming during the final day of 221B Con, and they're perhaps the most precious, because you know it'll all be over soon. After attending the 10 AM creativity pitfalls panel, I did some final shopping in the dealer's room, picking up a ship shirt and a hard-boiled Greg Lestrade shirt from Fox Estacado, hit the food truck for some late brunch, and then got down to business for the final five hours.  (It must be said that the 11 AM hour had some Three Patch Podcast being recorded, and as much as I love 'em, the key word there was "recorded," meaning I could catch it later.)

"Meet the John H. Watson Society" was next, and since the John H. Watson Society doesn't really have official gatherings, and I'm on my second year as a member now, it seemed a mandatory opportunity. Beth Gallego, the current head of the group, and Elinor Gray, the editor-in-chief of the Watsonian's journal were the panel for that one, and I had many questions to toss their way. The John H. Watson Society has been a fun society to watch as it evolved from the more traditional style of Sherlock scion society to something with fresh upgrades, and Beth and Elinor have been a good part of those upgrades from even before they were in their current positions with the group. Many in the crowd were interested in writing for the journal, and the subject of get-togethers for such a widely-spread-out society was also an attractive topic.

When the Watsonian hour was over, I dashed out to my car in the rain with last-minute hijinks in mind. One of the next hour's more attractive offerings was Elinor again on "Holmes in Retirement" with a focus on his beekeeping. And while I had prepared no cosplay outfits this trip, I had my car, and where I have my car, I also tend to have a beekeeper's regalia in the trunk. As a result, for Elinor's talk, I just quietly sat in the back, absorbing her bee lore as a beekeeper, covered in netted pith helmet, white labcoat, and cotton gloves that covered my forearms up to the elbow. Elinor is well up on her bees, and the costume may have helped me absorb just a wee bit more than I might otherwise have.

Since the food truck was still out on the veranda (or whatever that place was, covered so the rain didn't matter), I went out for a hot dog with tater tots and more Diet Dr. Pepper to get some caffeine in me for my final panel presentation, and had a lovely chat with a Portland Sherlockian. And then it was on to "Arthur Continuity Doyle."

At least one person would later tell me that "Arthur Continuity Doyle" was there favorite panel of the weekend, and if it ranked so highly in anyone's esteem, I will put that down to two factors. First, we had nice hand-outs, the little hand-sewn monograph-style booklets of Watsonian facts in a timeline (see below). And second, my partner in crime on this one was the quick-witted Lyndsay Faye. (See the internet.) 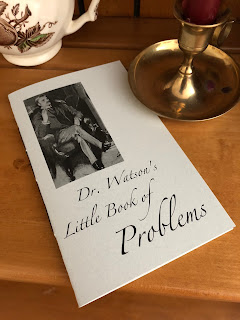 This was probably my favorite panel of the weekend too, as far as any I sat up front on, as Lyndsay is one of those bright lights that makes you all the brighter for her being there. The audience was up for playing along as well, and we bounced through Watsonian lore and legend with a lot of laughter and surprises out of left field. Lyndsay on "Final Problem"/"Empty House" is a particular hoot, and I'd recommend hearing her on that subject anytime she feels like going off on it. It was a really nice panel to serve as the last one of the day, before we got to the traditional "Our Last Bow."

"Our Last Bow" is the annual point where the five directors of 221B Con bravely sit up from of a hundred or two remaining con-goers and let us say whatever we want about the con -- good or bad. And they write things down. I had only one question, which I saved for after the official part, and that was "Where were all the complaining people?" This year's "Our Last Bow" was a virtual love-fest for both 221B Con and the hotel itself, which . . . let me tell you . . . this Atlanta Airport Marriott? Customer service like you wouldn't believe. Every hotel staff member I encountered was not only friendly, but seemed to actually like that we were here.

One point that did come up from the folks commenting on 221B Con was the genuine care with which it has been produced. I was suggested that since the directors are all female, there's more care-giving instincts to this con, and that may be true, but there's a lot to be said for the individual personalities that come together to run this thing every year. You can't create an atmosphere of acceptance and opportunity like this without genuinely good souls at the helm, and that they are. They care not just about some undefinable ideal called "Sherlockiana" or "fandom," but actual real people, and letting people bring their joy, whatever form it may take. It's still a Sherlock Holmes convention, and Sherlock is front and center. But a Guy Fieri moment or a McElroy brothers moment can be some fun within the fun, and add spice to the main dish. So with five sessions an hour, why not?

221B Con regulars are some pretty cool folks, as open to new ideas, alternative lifestyles, and just you-being-you as you can get. I've done this five out of the six years they've held it and never been disappointed.

And it's always a hard thing to leave. Which is now going to take a recovery evening before I head out in the morning.