More than a fan? Whatever.

In this week's marginally Sherlockian activities was a certain film with Benedict Cumberbatch doing his American accent and gesturing a lot. I won't get into that in depth here, but one portion of the whole experience that touched most upon Sherlockian life was a gift I got from a buddy of mine for going to the movie. 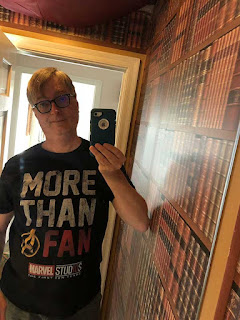 The "MORE THAN A FAN" Shirt

The back of the shirt listed the ten years of movies leading up to the current one, in a design patterned after a rock concert tour shirt. But on the front? "MORE THAN A FAN."

It made me laugh, seeing that phrase coming up as a point of pride outside of our little Sherlockian world. Only a fan would wear such a shirt. And only a fan would care that they were "more than a fan." And what the hell does that even mean?

Did you create the thing that you're supposedly not a fan of? That's about the only way I could see that you'd be more than a fan. And I'm sure creators would just wear shirts that said "I CREATED THIS! ME!" if they felt the urge.

So why the need not to be see as "merely a fan?" Why the need to differentiate between terms like "Sherlockian" and "Sherlock Holmes fan?"

Pondering this question once again in looking at it happening in a much more mainstream fandom than out own, one answer became apparent. Why consider yourself more than a fan?

Simple. Because fans are the horde. The masses of humanity. The ordinary folk who merely like something a lot. They're not the unique and rare individual who has done all that [insert name of differentiating fan here] has done. We're not the zombies who just walk toward the shiny object, we're the surviving humans who are much more complex than that, right?

It would be quite a helpful thing if we could celebrate our own uniqueness without creating straw men armies of those who aren't us, just to feed our egos when their ego-bellies are a-rumbling. The "fans" that we aren't, having self-identified as "aficionados," "cognoscente," or some other title that really should be bestowed by an outside agency. And what is any expert in a given field, not born so by natural talent, but a fan of that field?

What it really comes down to is this. You can be a Sherlockian, a Sherlock Holmes fan, a Holmesian, a Sherloxpert, a Arthority Conascente Doyloctopus, or whatever you want to identify as, in order to deal with your personal issues. Do some identity self-care, that's cool. But it's just bad manners to insist that the rest of the world agree with the rules of your bubble, and a bit obnoxious to walk around with it in giant letters on a t-shirt. (You can certainly sleep in it though -- this is a pretty comfy shirt. I can soak in how much I am "MORE THAN A FAN" all night long, then be a civil fan in the daylight hours.)

So celebrate your own uniqueness in whatever way you see fit, while letting others do likewise. Even if they're wearing a bow-tie, which is sure a lot more freak-flag fanboy than t-shirts ever were. There's nothing wrong with bow-ties, nothing at all. They're fine.  Just fine. Bow-ties. Yep. Fine.

Just fine. No judgement. See, I own this obnoxious t-shirt, what do I know about fashion?

Or ending blog-posts while biting my tongue. Bow-ties. Huh.
Posted by Sherlock Peoria at 1:26 PM