Throwing Sherlock out of my basement

Okay, a few words of preface.

I love Sherlock Holmes. A few days at that con I am trying to ease up on the mentions of (BUT IT WAS SO MUCH FUN!!) definitely did not dull my fervor.

But some days, you just need to get it all down to basics and try to bring a little order to the chaos that you call your home. So after sleepily doing a writing treadmill for an hour before breakfast, I charged up and charged down into my basement, that warehouse of wonders, that pit of despair, to do battle with the demons of accumulation and events past that live there.

It started simple enough, organizing gift bags, condensing shipping boxes, but at some point, I wandered down that alley in the back where The Big Display Items are stored.

I like big display items. They're especially fun at big events, so everyone can see your big point in a big manner. Unrolled movie posters live there, along with those fold-out display boards that seemingly came into existence with office supply store chains. And, boy did I go through a phase where I like to use those.

One great panel charted the number of times Holmes called Watson by name on a year-by-year basis, which is one of those things where I went, "Man, I spent a lot more time on research back in the day!"

There was one incredibly large poster of a very specific film Sherlock whom no one is excited enough about to hang an incredibly large poster of on their wall. There were other charters, graphs, a hereditary line drawn out . . . over-sized, pre-Powerpoint renderings for presentations that will never be done again. (Where do old presentations go to die? Maybe they got published somewhere.)

But at some point, practical purposes have to enter into the equation and you have to go, "Am I just keeping this here so someone else will have to throw it out when I can't?" So, sadly, one plays "taps" on an imaginary trumpet, condenses these monsters, and delivers them into the recycling, where perhaps their spirits will be passed on to some Sherlock Holmes pastiche printed on recycled paper.

Don't think I've gone too purge-happy yet. This guy below? He's still with me. He may retire to 221B Con or some other happier place one day, when he finds a big enough vehicle to ride in, but until then, I kind of like having him around. 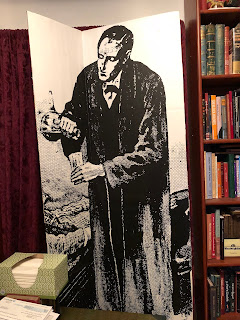 Posted by Sherlock Peoria at 12:07 PM