It's long past time that I mentioned Baker Street Elementary here, but as it's been getting some circulation on I Hear of Sherlock Everywhere, it probably hasn't needed the "Sherlock Peoria bump." On the road back from the oft-mentioned 221B Con, however, I discovered that our favorite "Sherlock and Watson as kids" comic now has some competition. Sort of. 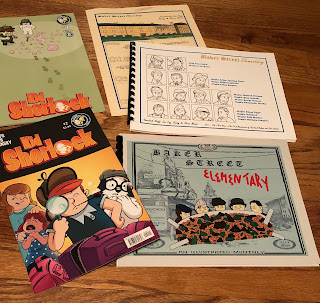 Kid Sherlock, published by Action Lab, is written by Justin Philips and drawn by Sean Gregory Miller, and looks to be intended for younger audiences. Baker Street Elementary, written and drawn by Rusty Mason, written, edited, and created by Steve Mason, and also created by Joe Fay, is definitely intended for Sherlockian adult (or children with good vocabularies) audiences.

Things never get too intense in either comic, both being about school children, of course. (Although there is a one-page tale where Kid Sherlock seems to fall in love with Mrs. Hudson that had me going, "Wait . . . what?" for a second.) But Baker Street Elementary goes down some much more familiar paths and is particularly wry in moments, with 2017's "A Scandal in Casserole" being a good example of same.

Having spent the evening in grade school, however, I think I'm going to now have to wander off to a late-night spot of fanfic to get back to a proper adult age. Being a kid is great when you're a kid, but after that . . . give me adulthood any day. Comics, however, can go down an AU young Sherlock path anytime they like.
Posted by Sherlock Peoria at 10:25 PM