Here's a fellow I would enjoy having a chat with. 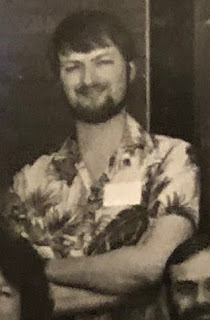 He was all of twenty-five years old. Just married two years. Had only that weekend met the greatest Sherlockian alive in 1983, according to most. Was about to write a book. And skin that wasn't doing that stuff your skin does when you pass sixty. (Some fuss about the gray, but it's not the gray, it's the skin.) Because that's me, me in 1983.

What would we talk about?

Well, quite a few things, and it would be a very tricky conversation. Because I know all the things he doesn't, and instead of just saying "Buy Apple stock!" I think I would want to talk Sherlockiana, and not just about buying more of those single-issue Strand Magazines I stumbled across once in Boulder. Because it wouldn't be the collecting that I would risk changing history to tell him.

It's more about the relationships, I think. Forewarning of a few rough corners that could be sanded off as a kindness to others who might get scratched or dented as he passes through their lives. When Frank Sinatra sang "regrets, I had a few, but then again, too few to mention," I often think Frank's singing guy must have been a real jerk, because anyone with any sense of other people had to have screwed up more often than a few times in their dealings with others. Especially if you're all about doing it "my way."

Not that'd I'd advise against every conflict. I can think of one or two I'd say "use your words better, think it out a little harder, and double down . . . kindly." Because sometimes you have to draw the line. But other times, in smaller moments, lines can get drawn too quickly.

And maybe I'd just play Calvin Harris's "Acceptable in the 80's" for him. And mention those three words that every younger version of ourselves might like to hear: "It gets better."
Posted by Sherlock Peoria at 11:39 PM