The "Holmes and Watson" Report

Let's get what may be the future unpopular opinion out the way at the outset:

I believe that the new film Holmes and Watson, starring the ever-polarizing comedic icon Will Ferrell and his best partner in crime John C. Reilly, is actually a work of genius.

Not like nuclear physics genius, more like comedically smart genius, but still, of an intelligence level above that of the common motion picture.

I had a great time, the good Carter had a great time, and this was after AMC screwed us over by changing the time and we walked into a dark and crowded matinee just as the opening credits finished. So, basically, we arrived in a bit of a bad mood.

But, like the best comedies, Holmes and Watson moves at a lively pace. Didn't think that bit was funny? Here's another bit. Don't like slapstick? Here's parody. Don't like parody? Here's a clever line. Don't like clever lines? Here's a bit of gross-out humor. (But not too much.) The movie's roots lay in all sorts of grand Sherlockian places -- Moriarty on trial again, Holmes abusing both Watson and Mrs. Hudson (taken to comic extremes), Mycroft's Diogenes silence taken to a new level, that co-detective thing that Elementary likes to do -- it's all over the map, which is where a comedy of this level needs to be.

And Millicent. I'm not going to tell you about Millicent, but I love Millicent. She's my dream girl.

Holmes and Watson is a great movie . . . unless you are just not a silly comedy person, and I know some of you are out there. I intend to see it again, definitely because I missed the pre-credits bits, but also because I will enjoy doing so. It moved along so quickly that when it was done I had to check my phone to see if more than an hour had actually passed.

John C. Reilly may even be my new favorite Watson (I have Nigel Bruce roots, you know). Will Ferrell does a funny, funny job of being Will Ferrell doing Sherlock Holmes, but he definitely isn't British enough for a top Sherlock (though did any of us really expect that?). Kelly Macdonald's Mrs. Hudson stands out as well.

If you have any impulse to see Holmes and Watson whatsoever, I would recommend that you do it. You'll find something in it worth your time. And it's a perfect addition to our Sherlockian film treasure trove, giving us one more treat to bide our time until 2020 when RDJ and Jude Law return in the roles.

P.S. First movie to ever mention the Holmes Canon using the word "Canon" internally? Could be! 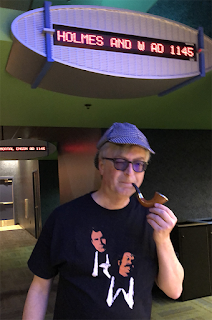 Posted by Sherlock Peoria at 2:21 PM