Well, lords, ladies, and deities of unspecific genders, when I set up my Three Patch Challenge at the beginning of the month, there were doubters out there, and, indeed, there will be those who even might claim that technically I did not read the entirety of the Three Patch fic list for December. And that would be true. A first chapter alone doth not a novel make . . . though often 'tis the best part.

The blog-diary of my fic-read made it to December 16, before Christmas movie releases started sucking up my time. And once I went evangelical on Holmes and Watson, well . . . .

But here we are with a mere three days until my deadline, month-end, and the new year. So let us reconvene.

John Watson's Twelve Days of Christmas by earlgreytea68. Boy, I'm late on this one. But at this point, with Watson dressed and Jingle the elf and Holmes dressed as Jangle the elf, I'm really feeling it, having been tasked with solving Jingle's murder myself a few days before Christmas at a holiday party. My elf name was Sparky. Here's the picture, just so you know I'm not having you on. 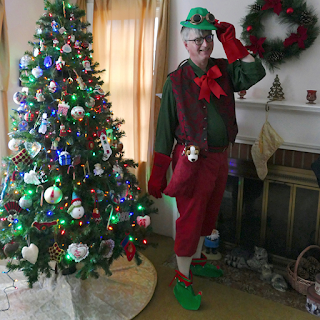 How could I be reading fics dressed like that? Anyways . . . .

Sherlock and John meeting as department store holiday temps (well, one of them is actually employed there) rings pretty true and the first chapter is the entire set-up to a traditional holiday romantic comedy.

Sleep Study by AxeMeAboutAxinomancy.  Well, first I had to google "Axinomancy." It's pretty much exactly what you'd think it would be. Not a good late night read, as there's a lot of sleep going on. And what's going on in Sherlock's head while John is sleeping, so it gets a tad science-y. Until a finale that's a start to more than just the reader.

Damage by lifeonmars. Coming between seasons, I'm not quite sure where my feet are on this one, as it may be heading somewhere the later season blew away.

Scotch by earlgraytea68. Also at a specific place in the continuity, but this one clicks pretty quickly, and the first part is purely a Mycroft character bit. And as such, pretty analytical. That's Mycroft.

"Slow Revolutions" in the Irregular Pieces series by Amythe3lder. A short character piece of young Mycroft's attraction to a girl older than him.

"Genius Loci" by silverpad. Here's something a little out-there from the norm: London as the main character. London talks to Baker Street, which makes me get very philosophical about London being Baker Street's god that it is also a part of. It's a lovely piece of urban spirit and how Sherlock and John connect with that spirit.

Sketchy by serpentynka has a very short first chapter, and I don't really get a feel for where it's headed from just the one. But I have to keep moving to meet the month-end. Hopefully I'll get time to circle back.

"Alone On The Water" by Mad_Lori . . . we meet at last. I have heard this fic mentioned so much, and its devastating effects upon its readers, that I'm hesitating on its opening even now . . . .

It doesn't spare any time into getting someone terminally ill and with a short clock, but like all fanfic written in 2011, it's hard to read without facts we later learned creeeping in. The parents we got to meet. The death of Sherlock Holmes. Even that sister that was lurking out there, and might surely have contrived to show up if she knew her brother was terminal. With its 2011 state of things, it seems like a closed box of a world, where Sally Donovan gets to show up simply because she's one of the few people that exist in that universe. With so much fic written after each season break, the multiverse of Sherlocks truly is a place where a myriad of paths spun out of each season's moments.

"The Truth of the Musgrave Ritual" by mydwynter. This one goes original Canon . . . or at least the story behind the original story and just why it is that Watson is not in the case as it appeared in The Strand Magazine. Having a touch of something myself at the moment, the mix of flu and cocaine that leads into the tale are not quite as romantic as they might otherwise seem, I'm sure . . . . I really should have not gotten to this final deadline pace.

Children of Small Gods, Chapter One: Temple of Small Gods, by alexxphoenix42. Ah. Nice little fantasy universe where a Sherlock is discovered by a monk named Brother John and magic ensues. Literal and kissing magic. Starting to feel a little like Fred Savage in The Princess Bride about these kissing parts, but like I said, I've got a touch of something and my inner child might be the only thing supporting my frame right now.

Back to mydwynter and Memoranda of Understanding. 'The Opposition Party." Ooooo, the bulk of chapter one is Mycroft and Greg Lestrade having dinner. And a good dinner. There just isn't enough food porn fanfic. (Did I mention that my only contribution to A03 involves Sherlock and ice cream? I need to get to the John and cookies tale one of these days, which leads into the . . . well, you can guess.)  Mycroft and Greg are still spending time together in mydwinter's So Full of Light. A lot less food and a little more business. They do make the interesting pair, and maybe don't seem to jump in the sack as quickly as John and Sherlock. Probably Mycroft's part.

Handle with Care by Brainygirl. Aren't recovering addicts supposed to stay clean from all sorts of addictive things . . . other drugs, alcohol . . . sexxxxx? John isn't doing too well on that last score with Sherlock in this one.

"Saved by the Bell" by IamJohnLocked4Life. Sherlock, John, and friends in TV sitcoms? While I'm not of the "Saved by the Bell" generation, sign me up! "I Love Sherlock," where the Watsons live upstairs from Greg and Molly, and Sherlock's schemes are always pissing off John. "The Baker Street Bunch," where Papa Holmes and Mama Moriarty try to create a blended family with Mycroft, Sherlock, and little Eurus having issues getting along with Jim, Jamie, and James Junior. "How I Met Your Mycroft?" "Myke and Molly?" "M*A*S*H Afghanistan?"

"Instrument" from redscudery's Rare Pair Bazaar. Janine and Sally Donovan should be a sitcom . . . though more of an HBO sitcom, as their breasts come into focus very quickly. So short that I head into "Dare" which pairs Stephen Bainbridge and Corporal Lyons, and I go "Who?" and move along.

"Through the Clouds" by Mazarin221B. We don't get enough of Sherlock Holmes at the point of his retirement decision, and this one definitely seems to be making that a happy transition.

Performance in A Leading Role by the well-known Mad_Lori. This one, it turns out, I have read . . . at least part of . . . a while back during a sampling phase. Three Patch do have their favorites that have come up more than once.

And with that, I'm done. I have managed to both succeed and fail at my Three Patch Challenge. Succeed, because I read each of the fics listed in the show notes for the December episode during the month of December, and failed because . . . well, reading every part, start to finish, of said fics would have taken a lot more obsession. And with some of the series, someone might have been writing more as I read. Fics do go on. But it was still a worthwhile exercise.

I don't think anyone from the older parts of our hobby can really appreciate the depth and breadth of the fan fiction universe out there, the quality of the writing, the so-varied planets of content spinning around the twin suns of Sherlock and John, without making themselves go an a reading marathon. We might think, "Oh, I've got a couple shelves of pastiches that someone managed to sell to a publisher over the last fifty years, and since I paid money they must be better than the free stuff on AO3," but that's just holding on a little too tightly to the past.

Explorations of Sherlock Holmes and John H. Watson, along with their friends and family, through alternate universes, between-the-canon-cracks scenes, and bizarre situations shine a lot of lights that cast shadows of Sherlock, etc. that can be quite refreshing.

But there's a good side and a bad side to rampaging through so much fic in a few short periods of time. You get a feel for the wide open universe of stuff that you still haven't read very quickly. But, if you're me, you might get a little tired of the kissing. (Kind of "I get it, universe, they're soul-mates! Can they be unrequited this time?") The myriad paths by which they get to that point, however, are always illuminating.

And so, 2018 ends with a fanfic marathon, and a major motion picture where Holmes and Watson sing of their love for each other in the climax. I'm pretty satisfied with that.

"Mr Mac, the most practical thing that you ever did in your life would be to shut yourself up for three months and read twelve hours a day at the annals of crime."

-- Sherlock Holmes, The Valley of Fear
Posted by Sherlock Peoria at 9:35 PM